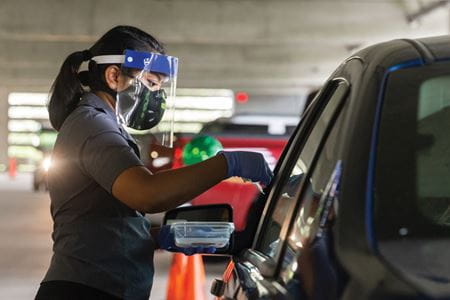 Mitigation testing is used to control community spread of COVID-19.

Physicians and scientists strive to provide answers and clarity, but the arrival and spread of COVID-19 in 2020 proved to be a monumental challenge. At Indiana University School of Medicine, our faculty and students banded together to help confront this new adversary. They created a safety net of testing and tracing. They learned quick lessons about providing care. They devised new means of protection and how the disease moves among us. By year’s end, they began administering a vaccine.

In March, Indiana University made the unprecedented decision to suspend most in-person operations, including research and instruction. In the months that followed, the School of Medicine played an integral role in not only formulating a plan to return students, faculty and staff safely to campuses across the state, but in confronting COVID-19 in our hospitals and our laboratories.

IU President Michael A. McRobbie tasked School of Medicine Dean Jay L. Hess to lead a team of experts to advise the university on how to resume operations. This led to the creation of a Medical Response Team, which planned and implemented health and safety strategies to protect students, faculty and staff. They were also asked to help campus leadership make decisions informed by expert analysis and with a knowledge of clinical care and public health.

A significant part of that response involved testing. With 110,000 students and nearly 9,000 faculty members in the IU system, it was no easy task.

Administering COVID-19 tests to returning college students was straightforward. More complicated was aligning the scores of moving parts needed to be aligned before and after the tests were given.

Tests from each campus had to be sent to the pathology lab in Indianapolis. It required constant communication between team leaders at each site. Their work ensured that potential hotspots were identified early and that local medical teams had supplies to handle a surge.

“Our main themes are making sure that we identify infections quickly and that we isolate or quarantine their contacts as fast as possible,” Beeler said in the fall. “That’s the best thing we can do to actually eliminate the spread of the virus. We interview people. We look into how they got the infection and why, so that we can make systemslevel approaches to try and help students and faculty avoid getting infected.”

In such outbreaks, time is a precious commodity. That was especially true with the coronavirus.

Fortunately, IU’s Adrian Gardner, MD, MPH, associate dean of global health and director of the IU Center for Global Health, was no stranger to contact tracing.

For seven years, he worked with colleagues at AMPATH, the IU-founded health consortium in western Kenya, and used contact tracing to combat tuberculosis and HIV there.

In 2020, Gardner’s expertise proved invaluable as he led contact tracing for IU’s Medical Response Team. This Herculean task required hiring and training around 50 tracers, managing a trove of patient data, and working with Salesforce to create Salesforce dashboards to give it utility.

Fortunately, Gardner was able to look in-house to the faculty and staff who power AMPATH. “We had a little bit of extra capacity because a lot of faculty normally based in Kenya were back here in Indiana,” he said.

The tracing mission was part of IU’s mitigation effort.

As America was just awakening to the pandemic threat, Aaron Carroll, MD, MS, began using his platform as a health policy contributor to The New York Times to share hard, but necessary truths.

Carroll, MD, a professor at IU School of Medicine, a health services researcher with a background in public health, a pediatrician and a prolific health policy writer, offered this sobering assessment as early as March, when the nation’s known COVID-19 death count was less than 100.

“I strive to place your fears in context and usually tell you that you shouldn’t be nearly as afraid as you are,” he wrote. “But when it comes to the nation’s response to the new coronavirus, I cannot be so reassuring.”

Carroll warned about the nation’s limited number of ventilators and ICU beds. It wasn’t comforting, but it was prophetic. It wouldn’t be the last time in 2020 he would share hard truths.

As a key figure in IU’s Medical Response Team, Carroll used his knowledge to marshal a large team of people in the preemptive testing effort at IU’s campuses around the state—testing aimed at identifying infected individuals before they had symptoms and before they had a chance to spread the disease.

The students who returned to the Bloomington campus in August were greeted by Carroll’s troops with saliva-based tests. Starting from scratch, they began collecting as many as 15,000 tests a week. By October, new IU Pandemic Response Laboratories in Bloomington and on the School of Medicine campus in Indianapolis enabled that number to grow to 25,000 tests per week.

Health officials in Indiana called on IU School of Medicine to train an army of students to administer vaccines. Within two weeks, more than 430 volunteered.

With COVID-19 numbers surging in Indiana at the close of 2020, hope appeared in the form of two vaccines developed by Pfizer and Moderna. Both requiring two doses, the vaccines began arriving in the state at the end of the year, with another of IU’s experts helping lead the effort in the dispersal.

Lana Dbeibo, MD, an assistant professor of clinical medicine at IU School of Medicine and an infectious disease expert, joined the Medical Response Team as the director of vaccine initiatives.

By year’s end, faculty and medical students were being trained on how to administer injections of the first vaccines. More than 430 medical students answered the call to volunteer, along with 209 IU nursing students—echoing a display of service from earlier in the pandemic when more than one-third of the Class of 2020 volunteered to graduate early to help join the COVID frontlines.

“I can’t tell you how heartwarming it is to see these students eager to volunteer and help in the biggest public health crisis of our time,” said Dbeibo, who led the student training effort. “They have demonstrated that they are capable of rising up to the challenge.”

Faces of the Fight

Beeler leads the effort to test symptomatic individuals and communicate with the pathology lab in Indianapolis analyzing samples.

Carroll oversees preemptive testing at Indiana University’s campuses around the state. The goal: identify individuals before they have symptoms and spread coronavirus.

Dbeibo, an infectious disease expert, is working with state officials and health care systems on vaccine distribution strategy as supplies arrive in Indiana.

Executive field director for AMPATH in Kenya, Gardner helped put in place and lead a group of 60 tracers and manage a trove of data they collected.