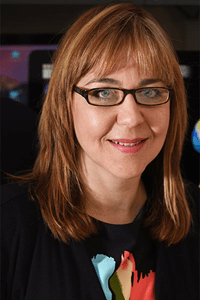 Liana G. Apostolova, MD, has been recognized as an Indiana University distinguished professor, the highest academic title for the university’s most outstanding and renowned scholars and researchers. She was joined by 10 other faculty members bestowed the honor.

As a global leader in Alzheimer's disease clinical investigation, Dr. Apostolova was selected as principal investigator of a $45 million National Institutes of Health/National Institute on Aging grant, the largest single NIH grant ever received by an IU researcher. Last year, the nearly $16 million in NIH support she received for her Longitudinal Early-Onset Alzheimer’s Disease Study (LEADS) was the top-funded IU research.

Since 1953, IU has recognized 254 scholars, scientists, artists and musicians as distinguished professors, with 98 currently serving as IU faculty. Thirty-nine women have held the title, more than half of whom were appointed in the past 14 years.

“IU's newest distinguished professors have all made major contributions to their fields of study where they are all widely respected and have earned international recognition and acclaim,” IU President Michael A. McRobbie said in a press release. “Their remarkable research and creative activity represent the pinnacle of what it means to be a researcher and scholar.”

Glenda joined Indiana University in 2015. A journalism graduate of Howard University, she has an extensive background in delivering health and science information to the patient and clinician audiences. Glenda can be reached at glenshaw@iu.edu.