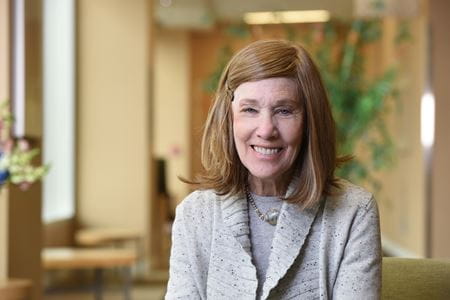 When breast cancer spreads, it often lands in bones, typically the ribs or hips. In Pam Perry’s case, it went to her skull.

Pam was diagnosed with estrogen positive breast cancer in 2008. She had a mastectomy and reconstruction surgery, and hormone therapy. For four years, that kept the disease at bay. But in 2012, recurring headaches prompted the discovery that her breast cancer was back—and that it had spread to her skull.

Pam was no stranger to breast cancer. Her first bout came in 1984, when her son was just four years old. She was horrified at the diagnosis—at that time, cancer was still a harbinger of inevitable doom. But surgery and radiation turned back the disease. For 24 years, she heard no more from cancer.

In 2008, a new lump appeared in Pam’s breast. The estrogen positive diagnosis was unrelated to her first breast cancer, but it still came as a shocking surprise. So did the 2012 news that the cancer had spread to the right side of her skull. Despite everything—and through each pass at cancer—Pam has been determined not to let the disease define her. She won’t allow it to push her dreams aside.

A wife, mother and now-retired public relations professional, Pam remains on the go. She’s traveled to France, Spain and Cuba. On the horizon are trips to Portugal and back to Spain again, and maybe even Italy and France. She’s also embracing a second act colored by art. Pam relaxes by sketching. She enjoys visits to museums and promoting her now-grown son’s fine art photography. Above all, she stays true to herself. “The breast cancer thing,” she said, “has just been in the background.”

Alyssa joined the Office of Strategic Communications in 2019 as the digital content manager. She recently moved back to Indiana after 8 years in Utah, where she told stories about research, education and clinical care at Huntsman Cancer Institute and the University of Utah.