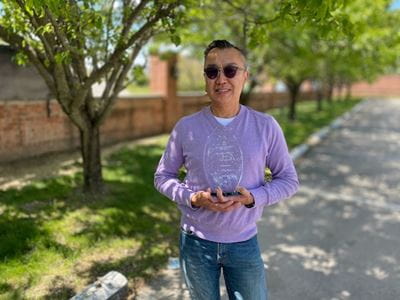 It was one hour before Emilio Baglietto’s final anatomy exam, and his anxiety was rising. He knew he needed to reach out to someone but didn’t know who to call. His family and friends would be supportive but couldn’t relate to the pressure he was feeling to succeed in medical school.

“So, I called Dr. Yung,” he said, referring to his physician mentor, Yung Nguyen, MD, MBA. “He stayed with me on the phone for a total of 40 minutes, he calmed me down, he let me review some anatomy via the phone—although he was a bit rusty! Then he gave me some parting words, and I went on to be one of the top scorers on my anatomy final.

“I don't know if my colleagues have been so blessed with their physician mentors, but I can safely say that I may not have made it past the first semester without my physician mentor,” said Baglietto, now a third-year medical student at Indiana University School of Medicine.

Nguyen has been named 2021 Physician Mentor of the Year. The IU School of Medicine alumnus and retired anesthesiologist doesn’t think he’s doing anything special—just offering a listening ear, a reassuring word and genuine friendship.

“For me, it’s like being their cheerleader, holding their hand and saying, ‘It will be OK; you’re going to make it,’” Nguyen said. “I’m there for them to air out their doubts and just talk about anything.”

As part of IU School of Medicine’s Physician Mentor Program, every incoming medical student is assigned to a physician mentor who acts as a support person throughout all four years of medical school. Physician mentors can be any current or retired medical provider in the state of Indiana who desires to mentor the next generation of healers, helping them navigate challenges and explore possibilities while striving for excellence. 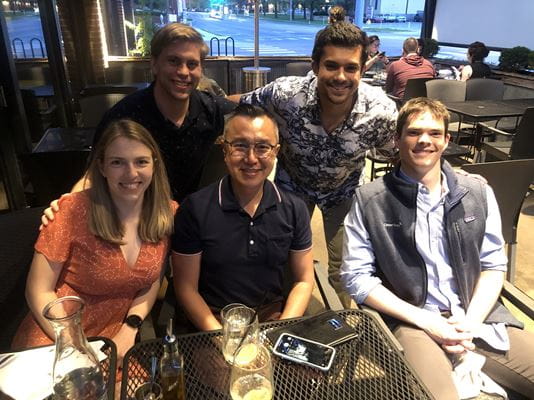 The minimum requirement is to meet with students at least two times a year in group or one-on-one settings and to be available for support as needed. Nguyen has gone well beyond that.

“He inherited not one med student but four, and he treated us out to eat at least three times in our first semester and six-to-seven times by the end of our first year—not to mention how many times he texts us to see how we are doing, sometimes twice a month,” Baglietto wrote in his nomination.

“The first month of medical school was very overwhelming. Classes were difficult, I knew very few of my classmates, and I was trying to acclimate to living in a new city. Dr. Nguyen offered to take my fellow mentees and I out to dinner on Mass Ave to meet for the first time. In the midst of great food, he took the time to listen to all of our stressors and offer advice,” recalled Zoe Guckien. “Even though he graduated from IU School of Medicine in 1995, he still described experiencing many of the same feelings, such as symptoms of imposter syndrome and anxiety over the fast pace of medical school curriculum.”

“Overall, his positivity and support have been extremely impactful on my wellness throughout my first two years of medical school,” she said. “I could not have asked for a better physician mentor!”

Dinner conversations are rarely about medical science. They’re more likely to center on real-life issues like juggling school and relationships or managing stress and the pressures to perform well.

“Dr. Yung is a character because he is engaging and has a lot of personality, yet he is also very insightful not only about medicine but about life and food and fun,” Baglietto said.

Although Nguyen doesn’t have children, he says he often gives “dad advice,” including tips on financial management.

“I tell them do not get yourself into a situation where you have golden handcuffs, which means you live above your means,” said Nguyen, who immigrated from Saigon, Vietnam, to Brownsburg, Indiana, in 1975 with his parents and four siblings as a refugee near the end of the Vietnam War.

He was the first in his family to become a doctor.

“Coming over to this country, we lost everything. We started from scratch. My parents worked full-time jobs, and I paid my way through undergrad and med school, so I knew the value of a dollar, and I didn’t want to be in debt like a lot of other people,” he said.

“I met up with a few of them recently, and it’s fun to see how they’ve progressed,” he said. “Now that they’re doing their clinicals and seeing patients, they’re so excited about the things they’re encountering.”

IU School of Medicine launched the Physician Mentor Program in 2015 with the goal of providing holistic mentorship to a small cohort of students throughout their medical school career. Learners say it’s been invaluable.

“I believe this program is so important for students because it allows us to establish a connection with someone who has already walked down the path that we have just started,” said Luke Landrigan, who nominated his physician mentor, Judith Kennedy, MD, a Fort Wayne obstetrician-gynecologist. “In addition to being my mentor and preceptor, I also see Dr. Kennedy as a friend and colleague.”

Murray, an Indianapolis anesthesiologist, carved out time to check in with his mentees often and treated them to dinner and bowling.

“It is particularly helpful to talk through career possibilities and how to overcome challenges with someone who has been in your shoes,” said Faith Roberts, one of Murray’s mentees.

In her nomination, she wrote, “It is a blessing to have someone you feel is truly invested in your success and that you could actually call if you needed anything. This type of mentorship is more of what we need on this journey in medicine and just life in general.”

The benefits of mentorship flow both ways, said Murray, who is glad he signed up to be a physician mentor and encourages other physicians to do the same.

“This experience of being a physician mentor has been an absolutely phenomenal one, as it has allowed me to reflect more deeply on my passion for medicine and also retrace my journey as I relate to my mentees in providing support, encouragement and advice,” he said. “My wonderful cohort have taught me to never underestimate the power of presence in addition to consistency in communication.”

Ben Richter, one of Nguyen’s four mentees, sees the Physician Mentor Program as an augmentation to his medical school experience.

“Seeing someone on the ‘other side’ helps me stay balanced and is a nice reminder of what I'm working towards,” he said. “Sometimes you get so bogged down in the present that you forget your goals for the future.”

Nguyen wants other physicians to know it doesn’t take a tremendous amount of time to be a good physician mentor.

“Really it takes minimal effort to send a quick note, email or text and respond, reaching out occasionally like you would to a friend,” he said.

Murray adds, “It is definitely worth the investment.”

“Whether it’s an organized dinner or an impromptu conversation while commuting, no time is wasted, and each point of contact is a meaningful building block in the development of a future health care professional who will practice with excellence,” he said.

IU School of Medicine is seeking physician mentors for incoming students in Indianapolis and throughout the state. All interested physicians are invited to fill out the physician mentor interest form. For additional questions about the program, please contact Physician Mentor Program Coordinator Kelly Matthews.