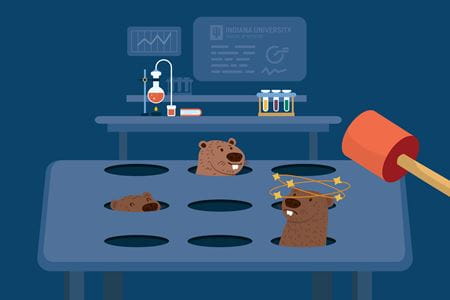 Think back to your days as a kid. Ever stop by an arcade?

If you did, you almost certainly played Whac-A-Mole, the popular game in which toy rodents randomly pop up from holes, and you desperately try to thump them back into hiding with a mallet.

For most of us, Whac-A-Mole was a fun way to pass time and maybe win some cheap arcade prizes.

For Milan Radovich, PhD, and his team, it may be the answer to helping more individuals overcome triple negative breast cancer—a particularly aggressive form of the disease that disproportionately affects young women and African American women.

You see, triple negative breast cancer is smart. Researchers will detect a potential genetic culprit they believe is helping the cancer grow. But when they knock it down with a drug, another misfit pops up, allowing the cancer to continue thriving.

But what if we could knock out the first “mole,” and predict which one would pop up next, he wondered. And what if we could block that hole, too? Would that be enough to short-circuit the game? Or, in his case, would that enable him to outsmart triple negative breast cancer and give cancer-fighting drugs a chance to do their job?

His lab is about to find out.

The newly established Vera Bradley Foundation Center for Breast Cancer Research at IU School of Medicine has set a goal of curing at least one sub-type of triple negative breast cancer. The center is uniquely positioned to make significant contributions to research related to this disease. Learn more.

Radovich and his laboratory team spent years analyzing triple negative breast cancer tumors and comparing them to healthy, non-cancerous breast tissue. Their goal was to identify precisely what had gone haywire in the cells so they could pick the best drug to attack the cancer.

Then, they looked at how the tumors respond and adapt after being hit with that initial therapy. And they identified a second drug to circumvent this real-time adaptation. In other words, they wanted to block the next hole before the mole could pop out again.

“One of the most exciting parts of this research is the opportunity to treat triple negative breast cancer in a truly personalized way, by delivering therapy based on how the tumor responds to initial treatment,” lab director Jeff Solzak said.

After promising pre-clinical results spearheaded by Solzak, the “Whac-A-Mole” theory has now moved into a first-in-human clinical trial run by IU School of Medicine oncologist Kathy Miller, MD. As part of the trial, patients at the IU Health Simon Cancer are the first in the world to receive a unique two-drug combination. This study is an important first step to test whether the drug combination is safe.

“There is a huge need for better and more targeted therapies in triple negative breast cancer,” said Radovich, who is also IU Health vice president for oncology genomics and co-director of the IU Health Precision Genomics Program. “This disease disproportionately affects young women and African American women, and it kills far too many individuals every year. I am motivated every day to develop better therapies for this disease and to benefit our patients in Indiana and across the country.” 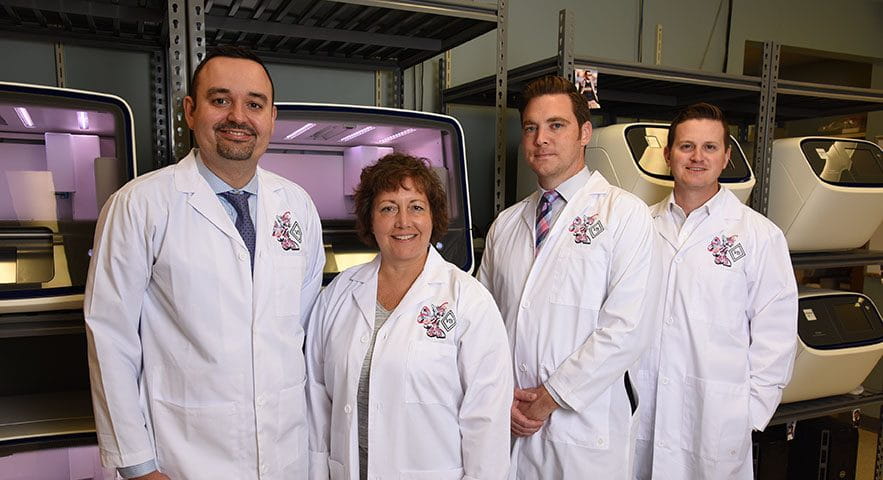 The study got a significant boost this fall when the National Cancer Institute, part of the National Institutes of Health, awarded Radovich a two-year grant for more than $375,000.

In addition to the NIH award, the research received early funding from the Indiana Clinical and Translational Sciences Institute, and it has been propelled by significant support from philanthropic donors, including the Catherine Peachey Fund, a program of the Heroes Foundation; individuals who give through 100 Voices of Hope, an innovative fundraising campaign that supports breast cancer research at IU School of Medicine; and several families affected by triple negative breast cancer.

“Philanthropy is essential to move breast cancer research forward,” Radovich said. “It allows us to explore new and innovative therapies, and this current project is possible in large part due to philanthropic support. When comparing our research to a marathon, philanthropists represent those giving us vital water and encouragement to keep us going when the going gets tough. We are all in this together.”

Radovich doesn’t just want to deliver for those who are funding his research, but for the many women affected by triple negative breast cancer. He remains hopeful that this trial will ultimately result in meaningful improvements in care.

If it does, we can all thank a favorite arcade game for giving him some inspiration.

Radovich is a member of the Vera Bradley Foundation Center for Breast Cancer Research and the Indiana University Melvin and Bren Simon Cancer Center, both of which are part of IU School of Medicine. He also is participating in the IU Precision Health Initiative, IU’s big health care solution aimed at preventing and curing diseases through a more precise understanding of the genetic, behavioral and environmental factors that influence a person’s health. Triple negative breast cancer is one of five diseases IU School of Medicine aims to cure or prevent through the IU Precision Health Initiative.

Karen Spataro served as director of the Indiana University School of Medicine Office of Strategic Communications from 2018-2020. She is now the Chief Communications Officer at Riley Children's Foundation.