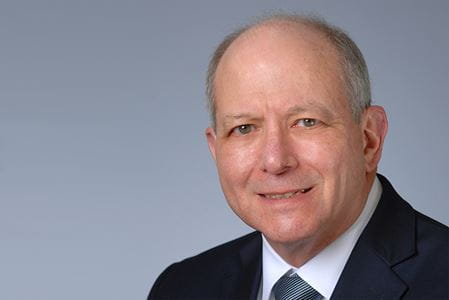 Progress in multiple myeloma research and improved outcomes for patients is the driving force for physician scientist G. David Roodman, MD, PhD. Roodman started researching and treating multiple myeloma, a blood cancer of plasma cells within the bone marrow, in the early 1980s.

“The patient is what drives the research,” he said. “It’s very satisfying when something works, but as I tell many of my trainees, research is 90 percent frustration, 10 percent elation, and the high is really high. That’s what keeps you going.”

That perseverance and many discoveries along the way led to Roodman being honored earlier this year with IU’s highest academic title as a distinguished professor, an appointment reserved for the university’s most outstanding and renowned scholars and researchers. Roodman’s lab pioneered the development of long-term marrow culture techniques to study differentiation and activity of a bone cell called an osteoclast.

Roodman’s research has focused on understanding the mechanisms underlying the bone disease associated with multiple myeloma, which occurs in about 85 percent of patients and causes devastating disease-induced fractures and bone pain and impacts survival.

“It’s very hard to see the horrific pain associated with myeloma patients who have problems with bone disease, and trying to do something for them has always inspired me to work harder,” Roodman, a member of the Indiana University Melvin and Bren Simon Comprehensive Cancer Center, said.

Taking that motivation back to the lab, Roodman has been trying to understand what causes the bone destruction process and why doesn’t the bone eventually repair on its own.

“I’ve seen how much has happened in the field while taking care of patients and watching them improve because of the stuff we've learned,” he said. “Some of the therapies have been targeted to mechanisms that we helped identify.”

Roodman joined IU School of Medicine as director of the Hematology/Oncology Division in the Department of Medicine in 2011. He served in that role until Jan. 1, 2020.

Roodman’s research has been funded by more than 30 National Institutes of Health grants and supported by the Veterans Affairs Merit Review program since 1981 for myeloma research. He served as a staff physician at VA hospitals in San Antonio and Pittsburgh before retiring from the Roudebush VA Hospital in Indianapolis last fall.

Still, Roodman is not slowing down in the lab. This spring, he was awarded a five-year $1.6 million grant from the National Cancer Institute to study ways to build bone and decrease tumor growth in multiple myeloma bone disease.

His past honors include being named a fellow by the American Association for the Advancement of Science in 2013 for his “significant contributions to research and education in cancer and bone research.”

While Roodman has authored more than 450 peer-reviewed publications and holds six patents, he says he is most proud of the more than 80 trainees he has mentored.

“That’s my greatest achievement,” he said. “No one reads your CV after you’re old. It’s only the people you train who continue to do well that make it all worthwhile. It’s great to see them grow into leaders in the field and continue to be superb scientists and, even more importantly, great human beings.”