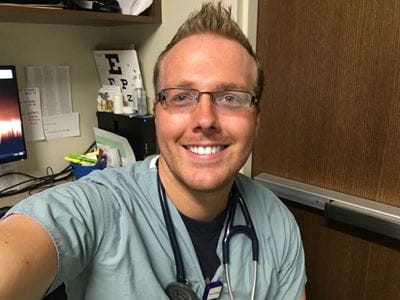 Gregory Taylor’s first hands-on experience in emergency medicine preceded his days in medical school—by a lot. Taylor was just 17 when an accident on his family’s farm gashed his leg, sending him to the emergency room in his small hometown of Fremont, Michigan. “We knew the ER doctor, and he asked me if I was interested in suturing,” Taylor said. “He showed me how to put the first stitch in, and I did the remaining 16. So essentially, I was my own first patient.” The experience was enough to pique Taylor’s interest in a medical career. The first member of his family to attend college, Taylor worked as an emergency room technician before enrolling in the biology premed program at Maranatha Baptist University in Watertown, Wisconsin. As an undergraduate, he participated in medical mission trips, traveling to Peru and Uganda, with Operation Renewed Hope.

“Setting up medical clinics in remote villages, working side by side with the ER physicians and interacting with the people there really made me fall in love with medical missions—and with medicine,” Taylor said.

During those years, his ties to medicine became even more personal when his mom was diagnosed with cancer.

“We spent a lot of time talking to oncologists and interacting with ER doctors during that time,” he said. “I was still undecided about what I wanted to do in medicine, but when my mom passed away, I knew I wanted to become a physician.”

Yearning to escape Michigan winters, Taylor traveled to Glendale, Arizona, for graduate studies. He completed a master’s degree in biomedical science at Midwestern University College of Health Sciences and was accepted into the university’s medical school upon completion. After graduating with high academic honors with his doctorate in 2015, he returned home to Michigan for residency at Michigan State University, Beaumont Hospital. He also enrolled as an officer in the U.S. Air Force Reserve.

“My family has a long military history—brothers, aunts, uncles, grandparents—I always knew I wanted to do something with the military,” said Taylor, who is now a flight surgeon with the 434th Aerospace Medicine Squadron at Grissom Air Reserve Base near Peru, Indiana.

Following a year as one of the chief emergency medicine residents at Beaumont Hospital, Taylor joined the IU School of Medicine Department of Emergency Medicine faculty in July 2019. He works in the ER at IU Health Ball Memorial Hospital.

“I got used to both community and academic settings at Michigan State and wanted to practice in a hospital with higher acuity and a lot of residents and opportunities for teaching,” he said. “Being able to work one-on-one with residents at Ball and to teach them is very rewarding.”

“I have an interest in rare cases and unique presentations—cases we don’t see all the time in the ER.”

And then, Taylor said, there are those cases that are simply unforgettable—and the reason ER physicians go into emergency medicine. Less than six months after arriving at Ball, Taylor was a member of the team that provided life-saving care to Ball State student Libby Oxley. Suffering from a pulmonary embolism, Oxley was dead for more than 30 minutes when she arrived in the ER. Taylor and the emergency medicine team administered a dose of tPA as a last resort to save her life. Battling through a harrowing and inspiring recovery, Oxley is among the 2 percent of patients who survive a cardiac arrest from a PE.

“As emergency medicine physicians, we never know from one day to the next what we’ll be doing—suturing a laceration or something that has the potential to save a life,” Taylor said. “And when we can save a life—it’s beautiful.”