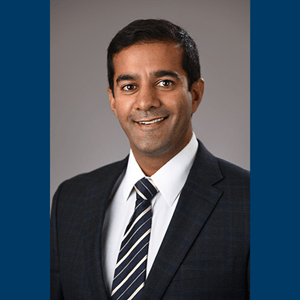 The Department of Otolaryngology—Head and Neck Surgery at Indiana University School of Medicine has grown significantly over the past three years with the addition of 14 new physicians and scientists, nearly doubling the number of department faculty since 2019.

A fellowship-trained Rhinology and Endoscopic Skull Base surgeon, Ramakrishnan said he was drawn to IU School of Medicine and the Department of Otolaryngology because of its culture.

“Working in academic medicine has always been challenging, but it is particularly challenging in the modern era,” Ramakrishnan said. “There are frequently many conflicting priorities, but the shared vision of the department, school and affiliated institutions really spoke to me. I felt like they defined a clear path to achieve ambitious and innovative goals and are willing to do what it takes to get there.”

Ramakrishnan is the second rhinologist in a few months to join the department; Satyan Sreenath, MD, assistant professor of clinical otolaryngology—head and neck surgery, started at IU School of Medicine in fall 2021. Rhinologists treat patients with chronic nose, sinus and breathing conditions, such as chronic rhinosinusitis and nasal polyps, nasal obstruction, sinonasal tumors, and perform endoscopic approaches to the skull base and orbit.

In addition to clinical care, Ramakrishnan’s role as a clinician-scientist lends itself toward advancing basic science and clinical research in his laboratory at IU School of Medicine. His clinical research centers on understanding patient outcomes from chronic rhinosinusitis and using these insights to choose appropriate personalized treatment plans for patients that maximize the chances for success.

For example, Ramakrishnan is investigating the role of the microbiome—the collection of microorganisms, such as bacteria, fungi and viruses, that live within the human body—and particular pathogens in respiratory diseases to understand how a person’s immune defenses function in response to microbial or environmental exposures.

A multi-year project that Ramakrishnan collaborated on at the University of Colorado was recently published in Oncogene. The study demonstrated that the microbiome has the potential to contribute to carcinogenesis—the formation of cancer cells—in head and neck cancer.

“We observed ‘dysbiosis’ in human saliva specimens from patients with cancer of the upper aerodigestive tract, where loss of the healthy homeostatic balance could be implicated in the disease process,” Ramakrishnan said. “We then showed accelerated tumor progression after antibiotic depletion of microbiota in a mouse model of head and neck cancer, and that microbial transfer from cancer bearing mice to a germ-free orthotopic mouse model also accelerated tumor progression. Most striking is the finding that a single bacteria (Lactobacillus) was implicated in this process through its actions on the aryl hydrocarbon receptor pathway.”

Ramakrishnan said this work is unique in that it shows individual bacteria, such as lactobacilli, can regulate tissue processes involved in carcinogenesis. It also suggests that targeting these specific bacteria could potentially influence cancer treatment outcomes in addition to serving as a simple disease biomarker.

Ben Middelkamp is a communications coordinator for Indiana University School of Medicine, where he supports Stark Neurosciences Research Institute and the Department of Otolaryngology—Head and Neck Surgery. Before joining the Office of Strategic Communications in December 2019, Ben spent nearly six years as a newspaper reporter in two Indiana cities. Having earned a bachelor’s degree in Convergent Journalism from Indiana Wesleyan University in 2014, Ben enjoys translating his background in journalism to the communications and marketing needs of the school and its physicians and researchers.