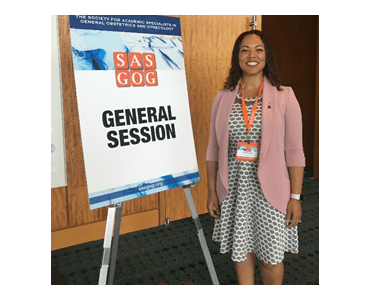 Chemen Neal, MD is working to improve physician wellness, growth and development, and her expertise is being utilized across the country.

“I work a lot with people who are dealing with imposter syndrome and burn out, as well as help people to develop themselves as leaders to get the tools they need to set and reach complex goals,” said Neal, an assistant professor with the Indiana University School of Medicine Department of Obstetrics and Gynecology.

In her clinical role, Neal sees patients at the Coleman Center for Women at Indiana University Health University Hospital, where she started the state of Indiana’s only chronic vaginitis and vulvar disease clinic. She serves in several leadership positions within the school, including as co-chair of the Diversity Council. Twice a year, she leads the Woman to Woman workshop for underrepresented female medical students, residents, faculty and staff. She also travels the country leading similar workshops at other institutions and conferences.

“I lead discussions with them around the issues they’re facing,” Neal said. “It’s a really good way to create community.”

In addition, Neal is on the school’s admissions committee and is the co-chair of the Diversity Council, a position she has held for several years. She is also part of a wellness steering committee for Indiana University Health.

In addition, Neal is the physician chair of the mentorship task force for the American Medical Women’s Association and a member of the mentorship task force for the Society for Academic Specialists in General Obstetrics and Gynecology (SASGOG). She spoke at the SASGOG annual meeting in April 2019 about strategic networking and creating meaningful mentorship relationships and led a panel discussion on unconscious bias in mentorship relationships.

Neal said her passion for leadership development and mentorship stems from her own experience as a first generation college student and a woman in academic medicine.

“I’ve always been interested in personal growth and development,” Neal said. “I care about doctors a lot and I want them to love their jobs. I want to make medicine better for everybody.”