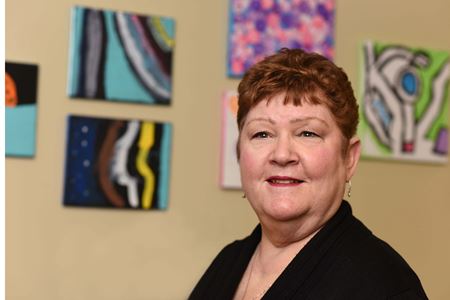 Each year in Indiana, thousands of suspected child abuse cases are investigated. An Indiana University School of Medicine pediatrician is working to help those children and stop more cases from happening.

“Child abuse can happen to any child, in any family, from any community,” said Roberta Hibbard, MD. Hibbard first joined IU School of Medicine in 1985. Since then, she’s been working to grow the Department of Pediatrics Child Protection Program by working not only with researchers and students, but also the Department of Child Services, law enforcement, prosecutors, teachers and physicians from all over the state.

“During my first three years here, we reached about 1,500 professionals across the state and for the first time brought together people from all of these disciplines to talk to each other,” said Hibbard. “It was really the beginning of the movement toward child advocacy centers and a truly multidisciplinary approach to helping children and families.”

After earning her MD from Case Western Reserve University in Cleveland, Ohio, Hibbard decided to study child abuse toward the end of her pediatric residency at the University of California Irvine. She says she wanted to do a research project in child sexual abuse by looking at how children drew pictures of people and finding out if there is a way to help kids express what happened to them. The idea stemmed from Hibbard’s mother, a kindergarten teacher. One of her students drew a strange picture of their father. They later found out the child was being sexually abused.

“I said ‘OK, that does it, I have to do this research project,'” said Hibbard. She began the study during her fellowship in Academic General Pediatrics at the University of Rochester in New York. “I was able to get multiple counties to collect the data to get drawings in the course of their evaluations of children and I did the medical evaluations of the children. We found that in fact it is very unusual for children to draw pictures of private parts on their people.”

After coming to IU School of Medicine, Hibbard said her immediate focus was on communication challenges when different groups responded to child abuse.

“It became very clear that we needed a clinical program to help see and do the medical evaluations for those children,” said Hibbard. “We then added on clinics and evaluations for physical abuse. We then added on educational programs for all of the hospitals in the community to bring them together and to meet on a regular basis with child protection services, law enforcement and prosecutors, because if we were having a problem with communication and coordination, the other hospitals were too.”

In the mid-1990s, Hibbard helped start the state’s first Child Fatality Review team in Marion County. The team included members from a variety of groups to try to figure out what caused children to die in the county.

“It was a big, multidisciplinary effort to really look at not just child abuse fatalities,” said Hibbard, “but at the communication and coordination around investigations when children die and how are our children dying, whether it’s accidents, child abuse or medical conditions, and are there things that we can do to try to prevent child fatalities?”

In 2008, those efforts expanded statewide with the creation of the Pediatric Evaluation and Diagnostic Service, or PEDS program, for the Department of Child Services. Faculty and staff became available for consultation and guidance on the medical needs of a child who may have been abused. Hibbard said they’re now consulting on over 6,000 cases a year for child protection services, medical providers and other professionals statewide.

“We’re more available to other physicians around the state,” said Hibbard, “but also to child protective services case workers who haven’t been to medical school, may or may not have a lot of training in child development, but need somebody to say ‘hey, does this make any sense?'”

Over 30 years since she joined IU School of Medicine, Hibbard’s research is continuing to help medical providers, social workers, parents and the community to understand situations that could lead to child abuse, such as during toilet training or when infants cry. Hibbard teaches parents the importance of putting the infant on their back in their crib and leaving the room until they calm down if they’re feeling frustrated.

“We know that infants around three to four months of age are at the highest risk of being shaken, thrown or slammed because they’re crying, screaming and irritable,” said Hibbard. “The reality is no baby has ever died from crying, but they have died from what their parents did in response to the crying.”

Hibbard also works with parents to help them learn the importance of finding a proper caregiver for their children.

“You have to know who is caring for your child, does that person really want to be taking care of your child and do they have the skills to do it,” said Hibbard. “There is a huge association of maltreatment with having an unrelated, male care provider taking care of your children. We really need to continue working on making good daycare and childcare resources available to families, but also really helping parents and making good decisions about who they leave their children with.”

Students in the Department of Pediatrics are also learning about child abuse research and prevention. A major focus for education in the department is sentinel injuries in infants, which are seemingly minor injuries such as bruising, a burn or a fracture, but Hibbard said they can often be a sign of something more serious.

“When you do radiographic imaging with those children, a very significant proportion of them, 20-30 percent, will have additional serious injuries if you look for them,” said Hibbard, “and when you look at children who are subsequently much more seriously injured from abuse, 20-30 percent of them will have these previous sentinel injuries… So we’re really trying to teach medical providers, starting with our students, to think about sentinel injuries and what kind of evaluation those children may need to be sure that there isn’t something more serious going on.”

With five board-certified child abuse pediatricians, two nurse practitioners, three social workers, two nurses and significant support staff, the Department of Pediatrics Child Protection Program is now one of the largest in the country, something Hibbard said would not be possible without collaboration from other groups within the state that has developed over time.

“The reason we’ve been so successful in growing and developing our program is because of the collaboration, cooperation, coordination and support from the hospital and the school, the Riley Children’s Foundation, private foundations, the Department of Child Services and all the providers,” said Hibbard. “I’ve been here 33 years, so it’s taken all of that time to do that, but we’ve continue to build and grow and build and grow.”

Roberta Hibbard is a professor of pediatrics and the director of the Child Protection Program at IU School of Medicine.