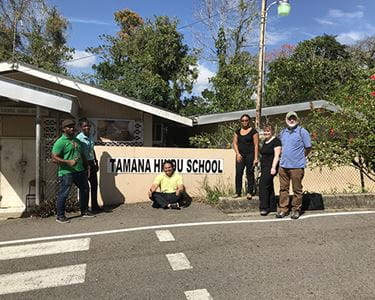 From her lab in northern Indiana, Molly Duman Scheel, PhD, prepares weapons to battle the deadliest animal on earth. Her target has no teeth or claws and can’t be killed with bullets, slings or arrows.

Instead, Dr. Scheel uses modified baker’s yeast in an effort to eliminate mosquitoes responsible for spreading diseases such as yellow fever, malaria, chikungunya, zika and dengue that kill more than one million people worldwide each year. Actually, she isn’t trying to eliminate all of the mosquitos, just the females.

“We modify yeast to make special types of RNA that turn off mosquito genes. The yeast, when consumed by mosquito larvae, turns off genes required for their survival, but which does not impact humans or other non-target organisms,” explained Dr. Scheel.

Dr. Scheel’s lab has focused on various methods of mosquito control since receiving a grant from the Bill and Melinda Gates Foundation in 2015. “My training is in developmental genetics.  Over the years, I became interested in comparing development in different types of insects.  When I set up our lab at IU School of Medicine-South Bend, I began to interact with mosquito geneticists at Notre Dame,” she said.

She has previously received grants from USAID’s Combating Zika and Future Threats Grand Challenge in 2016 and a grant from the US Department of Defense focused on feeding this yeast to adult mosquitoes in sugar baits. As with the larvae, it turns off genes required for mosquito survival killing the adult mosquitoes.

The research focused on female mosquitoes has the potential to aid other research targeting mosquitoes. “There are several new mosquito control strategies that require mass releases of only male mosquitoes. Our research could greatly benefit these new strategies by assisting with the mass-production of male mosquitoes,” added Dr. Scheel, who is also part of the Eck Institute for Global Health at Notre Dame.

Dr. Scheel and her team test the yeast in the lab by feeding it to mosquitoes to see if it kills them. It is also tested on non-target insects, such as butterflies, to make sure that they survive. If things go well in the lab, they take the experiments outdoors — first testing the yeast in small tents, and then if all looks good, in the open field.

The team is also working on efforts toward scaling up yeast production so that it will be suitable for commercial production and global deployment. “We are also working with formulation specialist collaborators to develop commercial formulations that are stable during shipment, as well as in the field when the yeast is exposed to tropical climates,” Dr. Scheel added.

Even if their efforts are successful, Dr. Scheel said it will be hard to completely eliminate mosquitoes. “We will most likely just help to reduce the number of mosquitoes in places where there are ongoing outbreaks,” she said.

As assistant director of communications for the IU Center for Global Health and AMPATH, Debbie shares stories about the university's partnerships to improve health care in Kenya and around the world. Contact her at 317-278-0827 or debungar@iu.edu.