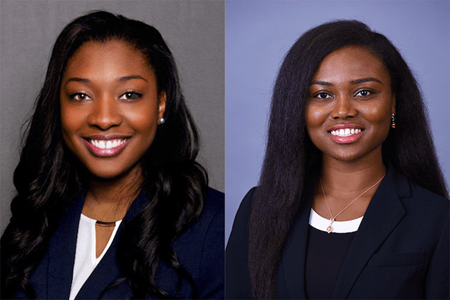 For Angela Amaniampong, DO, and Ruby Benn, MD, Chaniece Wallace was much more than a colleague at Indiana University School of Medicine. She was a mentor and friend. Now Amaniampong and Benn carry her legacy forward as recipients of the newly established Dr. Chaniece Wallace Health Care Disparity Research Award.

Wallace, a chief resident in pediatrics, died in October 2020, two days after giving birth to daughter Charlotte, from postpartum complications related to preeclampsia. Her tragic passing deeply impacted the IU School of Medicine community and attracted national media attention, highlighting racial disparities in maternal mortality rates in the United States. Preeclampsia, a disorder of new-onset high blood pressure occurring after 20 weeks of gestation, affects Black women at a rate that is 60 percent higher than for white women, according to a 2017 study by the federally funded Healthcare Cost and Utilization Project.

“Dr. Wallace was deeply committed to health care for the underserved and minoritized children, teens and families,” said Jerry Rushton, MD, director of the Pediatric Residency Program at IU School of Medicine. “Through multiple efforts to honor her legacy in mentorship, advocacy and research, we can ensure that her passion to make a difference will continue.”

The Dr. Chaniece Wallace Health Care Disparity Research Award—established in 2021 by the Office of Graduate Medical Education at IU School of Medicine—is a $1,000 award recognizing a resident or fellow who has demonstrated commitment to addressing health care inequities through research, advocacy and community outreach. Francesca Duncan, MD, MS, now an assistant professor of clinical medicine at IU School of Medicine, received the inaugural award in 2021 as a pulmonary and critical care fellow doing research on racial disparities in lung cancer.

“Research can highlight racial disparities that are unrecognized and under-identified and help to develop solutions to these challenges facing so many patients in the U.S.,” Rushton said.

Following her graduation from Michigan State University College of Osteopathic Medicine in 2019, Amaniampong came to IU School of Medicine for residency training in pediatrics, largely due to the influence of Wallace. During the interview process, she had been paired with Wallace as part of a “second look” visit for top applicants who are from populations underrepresented in medicine (URiM). Wallace told her about the inclusive culture at IU School of Medicine and the close-knit connection between URiM residents. When Amaniampong came to IU, she found Wallace’s account to be true. Their friendship grew as Wallace became a chief resident, modeling commitment to equity and patient advocacy.

“One of the many things Dr. Chaniece Wallace did well as a chief resident, mentor and pediatrician was make sure every single person she encountered felt seen, heard and genuinely cared for,” Amaniampong said. “Through leadership, education and advocacy, I have shaped my tenure as a pediatric resident to reflect the same values that Dr. Wallace did. It is an honor and privilege to carry out her legacy.” 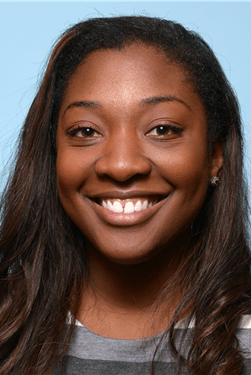 In October 2021, she co-led an “Upstander Intervention” workshop for IU School of Medicine medical students with Alvaro Tori, MD, associate dean for diversity affairs. She went on to lead two more workshops for her pediatric residency program addressing issues of inclusion, systemic equity and anti-racism.

“I taught residents how to respond to acts of racism in the medical workplace, empowering them to use their voices to advocate, and hopefully creating learning environments whereby we can all improve for our patients by eliminating disparities,” she explained.

Amaniampong served as a Graduate Medical Education (GME) representative to the Honor Code Task Force, a collaborative, school-wide effort resulting in expanded language to emphasize IU School of Medicine’s commitment to the core values of excellence, respect, integrity, diversity and inclusion, and cooperation.

“The revision articulates the goal to be an antiracist, equitable, welcoming and inclusive organization,” Amaniampong explained. 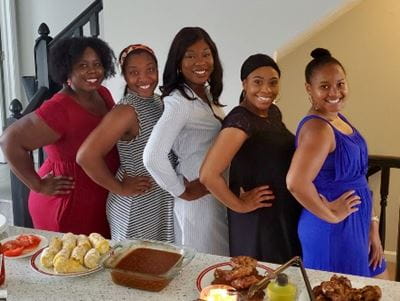 She is a member of the search committee to recruit the school’s first Executive Associate Dean for Diversity, Equity and Inclusion and Chief Diversity Officer. Additionally, she has served as co-chair of the GME Multicultural Physicians Alliance for the past two years and has partnered with GME to improve diversity recruitment among residents.

“Being a part of these committees and task forces has allowed me to advocate not only for other URM medical students, residents and faculty, but also for my patients,” she said.

Now a chief resident in pediatrics, Amaniampong remains excited to continue her research, teaching and other initiatives aimed at dismantling disparities in medical care. She hopes to inspire others as Wallace inspired her.

“I am very thankful, blessed and honored to have met Chaniece through my journey in medicine,” Amaniampong said. “She has made me into the doctor I am today, and wherever I go, I will continue to work toward achieving health equity and improving the health and well-being of everyone in the community. I know that is what Dr. Chaniece Wallace would do.”

Benn, a chief resident in obstetrics and gynecology at IU School of Medicine, also considered Wallace a friend and mentor. In March 2020—seven months before Wallace’s passing—Benn traveled to Washington, D.C., for the Congressional Leadership Conference of the American College of Obstetricians and Gynecologists and met with Indiana legislators to discuss strategies for decreasing maternal morbidity and mortality.

“I never imagined that I was also interceding for a friend,” said Benn, choking back tears. 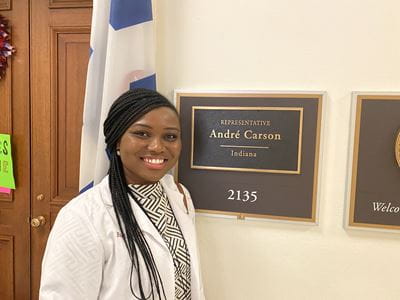 Studies show Black women are two-to-three times more likely to die from pregnancy complications than white women, even when adjusted for socioeconomic status and education level.

“Dr. Chaniece Wallace, despite her education and socioeconomic status, age and health, died due to pregnancy-related complications…The passing of my dear friend has redefined my OB-GYN residency career, and now, my passion for addressing health disparities has a personal motivating force driving it,” Benn said.

During her time in Washington, Benn advocated for increased research funding for women’s health and lobbied for an extension of Medicaid coverage past 60 days postpartum because a significant percentage of morbidity and mortality events occur more than two months after delivery. She was thrilled when, a year later, the State of Indiana announced the expansion of Medicaid benefits to 12 months postpartum, beginning in 2022.

Benn’s ongoing research focuses on disparities in influenza and Tdap (tetanus, diphtheria and pertussis) vaccination rates among pregnant women at Sidney and Lois Eskenazi Hospital. She’s looking at the influence of factors including age, race, socioeconomic status and language. 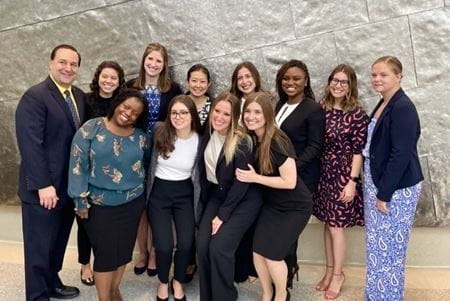 “These vaccines are crucial parts of prenatal care in preventing devastating complications for both moms and newborns,” Benn explained. “My goal is to identify barriers affecting vaccination acceptance rates in our communities and develop interventions to improve uptake.”

Throughout her time as a medical student at IU School of Medicine and continuing as a resident physician, Benn has been a strong advocate for diversity, equity, inclusion and justice, said Nicole Scott, MD, director of the OB-GYN Residency Training Program.

“Ruby is a rising chief and has been an incredible resource for lower-level residents in helping them navigate the challenges of residency, including discrimination or bias that trainees may experience,” Scott said. “She is deeply committed to the just and equitable care of all women and to elevating the care we provide for Black women.”

As a member of the OB-GYN Diversity, Equity and Inclusion Committee, Benn works to promote an inclusive environment in the department and increase URiM recruitments. Benn also mentors undergraduate URiM students interested in medical careers. 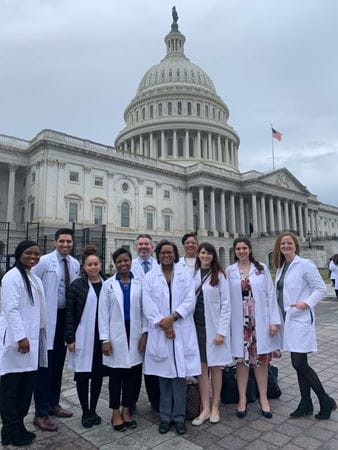 “One thing that attracted me to the OB-GYN program at IU School of Medicine is the diversity here. There are a lot of faculty that look like me,” she said. “Studies show having representation within your specialty improves patient outcomes.”

Patient advocacy can be lobbying in Washington, as she did in 2020, or it can be one-on-one, helping an individual patient connect with meaningful resources to improve their care, Benn said. Wherever she ends up practicing after residency, Benn knows she will always speak up for equity.

“As a doctor with a zeal for helping women who look like me, health disparity and inequity is not just abstract—it is personal,” Benn said.

The tragic death of a dear friend and colleague only reinforced her drive.

“I find myself more eager to come out of my comfort zone to discuss and address health disparities,” Benn said. “That’s what Chaniece deserves—that’s what all my patients deserve.”