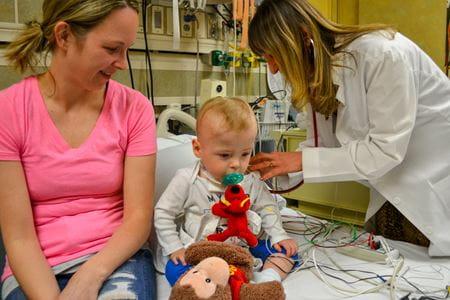 The hustle of everyday life can be exhausting. Adults find themselves bouncing between responsibilities that can include, but are not limited to working a full-time job, or multiple jobs, keeping up with the kids, pursuing additional education, preparing meals, finding some time to watch a favorite television show, and bargaining for an iota of sleep at the end of the day until we find ourselves repeating the process.

While adults usually value the sleep they can get, children are always on the go and usually neglect the importance of regular sleep. Today’s kids have all types of stimulation and are constantly surrounded by a world full of screens that provide them with information, education, and entertainment, especially during a pandemic that has left them with limited alternate activities. National Sleep Awareness Week passed earlier this month (March 14th – 20th), which presented a great opportunity to hear from some of our own sleep health experts about their work and how to promote healthy sleep for children.

According to Dr. Hasnaa Jalou, Indiana University School of Medicine’s Director of Riley Sleep Disorders Center, “Sleep is the foundation of good health.” Sleep can often be overlooked as an indicator of exceptional health, but this is something that parents and children need to focus on more, as younger children have become more susceptible to sleep disorders.

When addressing the fact that children of all ages now have more access to tablets, smartphones, monitors, and screens, Jalou shared that younger children are becoming increasingly affected by circadian rhythm disorders, such as delayed sleep phase syndrome, which is more commonly found in adolescents. Some of the biggest sleep-related issues seen at the Riley Sleep Center are the increasing number of children developing behavioral and psychological related sleep disorders, as well as, short sleep times for children that have sleep apnea related to obesity.

Jalou’s colleague and Director of Behavioral Sleep Medicine at Riley Children’s Hospital, Sarah Honaker, MD, also weighed in on new developments with children’s constant exposure to screens. “Screen use is usually an indoor, sedentary activity, whereas natural light and activity are known to promote sleep,” reported Honaker, “Screen use can also be activating and promote wakefulness.” Families are generally not aware their child is not sleeping enough, but insufficient sleep in the most common sleep problem for children. Children may not appear sleepy, but they can display symptoms of hyperactivity, focus issues, or irritability. Honaker also warned, “Exposure to blue wavelengths (produced by screens) can suppress or delay release of melatonin, a sleep hormone produced by the brain.”

Jalou suggested that children need to have a persistent bedtime routine, avoid electronics and light exposure at least one hour before bedtime, and avoid caffeinated beverages later in the afternoon and evenings to achieve adequate sleep. “Healthy sleep is essential to a robust immune system,” answered Jalou, “and for young children, it is crucial for their normal growth and development, affecting academic performance.”

A common guideline would recommend that preschool-aged children should sleep between 10 to 13 hours, school-aged children between 9 and 11, and adolescents between 8 and 10, but Honaker shared that parents should look for signs that their child is not getting enough sleep. These signs might include falling asleep in the car, sleeping in late during weekends, or having difficulties waking your child.

Not only did Honaker stress the importance of sleep quantity, but she also noted it is important to get restful sleep so adults and children alike can feel their best. Two to four percent of children can have obstructive sleep apnea that can impair sleep quality. For children of color, these recommendations may be even more important.

“Research shows that black and Hispanic children are more likely to have obstructive sleep apnea but are less likely to receive diagnosis and treatment at an early age,” said Honaker. She referenced the American Sleep Apnea Association and said that they have helpful resources to learn more about OSA in kids and adults.

Honaker specifically addressed how teens tend to have hectic schedules and can experience what she called, “social jetlag.” She recommended that teens and parents of teens should take steps to reduce the sleep discrepancy that occurs when children are becoming chronically sleep-deprived throughout the week, leading to extended hours of sleeping in on weekends. Honaker explained, “Our bodies are not meant to operate under that type of schedule, and the impact on health, mood, and overall functioning is huge. Taking steps to minimize this circadian disruption might include less weekend oversleep, earlier weeknight bedtimes, and advocating for later school start times for middle- and high-school students.”

The Riley Sleep Disorders Center has become one of the largest pediatric sleep centers in the country. It currently has 16 beds, four pediatric Sleep Medicine Diplomats, and two pediatric sleep psychologists. This center is also the only accredited sleep center for children in the state of Indiana. Jalou stated, “Our mission is to serve children and adolescents with sleep disorders, promote healthy sleep, and provide them with the best care.”

Jalou joined Riley Hospital’s Pediatric Department in 2006 as a pediatric pulmonologist and earned her Sleep Medicine Diplomat in 2009. “I was always fascinated by the relationship between sleep and respiratory physiology and the consequences of sleep disorders on daytime functioning,” said Jalou. She is particularly interested in sleep-disordered breathing in patients with Down syndrome, Prader Willi syndrome, other congenital disorders, and obese children.

Honkaer joined IU School of Medicine faculty in 2014. She is a clinical psychologist with a board certification in behavioral sleep medicine. Already having over 25 publications in pediatric sleep, Honaker continues her research that is focused on early identification of children with obstructive sleep apnea and she has received funding for her studies from the National Institute of Health and the American Academy of Sleep Medicine Foundation.

Reilly Wilson is an administrative assistant for the Department of Pediatrics. He primarily works with Pediatric Hospitalist Medicine, but his role allows him to help with special projects throughout the department.