Unraveling the Complexities of Cancer Cachexia 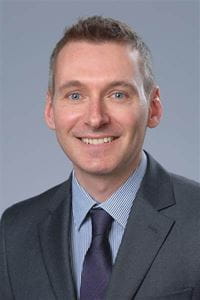 When Andrea Bonetto, PhD began studying cachexia as an undergraduate at the University of Torino, Italy, he was surprised by the relative lack of research focused on such a debilitating syndrome. When it came time for him to choose a lab in which to begin his career as an investigator, he knew exactly where he wanted to concentrate his efforts. Now, as an Associate Professor of Surgery and member of the Indiana Center for Musculoskeletal Heath, Dr. Bonetto and his lab continue to make strides in understanding the factors at play in this complex and systemic condition.

Cachexia is a muscle wasting syndrome commonly seen in patients with serious underlying diseases such as cancer. In fact, according to the most recent statistics, one-third of all cancer deaths are directly attributable to cachexia. The condition is also heavily associated with poor quality of life, reduced treatment response and inability to tolerate treatment. Often times the loss of muscle mass due to cachexia results in the patient experiencing weakness and fatigue so severe that even walking becomes difficult or impossible. Recent studies have also shown that muscle mass plays a critical role in the survival of cancer patients. Patients who at time of diagnosis already present with cachexia will also likely experience higher chemotherapy toxicity and a significantly reduced chance of survival.

There is currently no cure for cachexia, due in large part to the systemic nature of the syndrome. Numerous factors, produced by both the host and the tumor, induce the skeletal muscle wasting effects. As Dr. Bonetto explained, “cancer cachexia is a multiple mechanism condition, which means it may require multiple treatment strategies, at the same time, to combat it. This makes understanding the condition as a whole much more complicated.”

Understanding the complex relationship between the patient, the underlying disease, the treatment they are receiving to combat the disease and the multitude of factors produced as a result of these processes holds the key to successfully treating cachexia. The work of the Bonetto Lab at IUSM is focused on unraveling this complex problem, one factor at a time. Some of the more novel topics being explored by Dr. Bonetto include the effects of cachexia on bone, including the biochemical interaction with muscle (the so-called muscle/bone crosstalk), and the mechanisms of treatment-induced cachexia, including chemotherapy.

Of particular interest to Dr. Bonetto’s team is RANKL, a protein that acts as the master regulator of bone resorption. Existing literature, such as the work of Dr. Jerome Frenette of Laval University in Quebec, demonstrates that besides the central role RANKL plays in activating osteoclasts, there is also a direct impact on skeletal muscle. This realization naturally led to questions about this connection and if RANKL regulates both muscle and bone loss in cachexia. When the Bonetto Lab set out to investigate these questions, it did not take long before they began uncovering intriguing data.

Since previous research into cachexia had focused exclusively on muscle loss, the Bonetto Lab began their inquiry by finding that, in addition to muscle loss, mice carrying tumors or exposed to chemotherapy were presenting concurrent loss of bone. Intriguingly, this phenomenon was observed even in the absence of bone metastases. From there, they were able to demonstrate high levels of RANKL in patients and animals with ovarian cancer, also showing evidence of bone turnover and muscle wasting. Subsequent testing of the effects of RANKL applied directly to in vitro and in vivo models validated its effects on the loss of bone and muscle as well as its massive impact on weakness and fatigue.

At this point the data suggested that RANKL could play a key role in promoting muscle wasting in ovarian cancer. To take his results one step further, Dr. Bonetto and his team performed gene expression profiling to investigate what genes were modulated in muscle upon treatment with RANKL. Surprisingly, the results showed common cachexia pathways widely reported in the literature and closely associated with their models, further supporting a direct effect of RANKL in cachexia. The entirety of the data produced was more than enough to begin considering RANKL a new regulator of muscle and bone in cachexia.

The next step in the investigation was to begin targeting RANKL in animal models with ovarian cancer. Using two FDA-approved drugs already in use for the therapy of bone disease, denosumab and the bisphosphonate zoledronic acid, the Bonetto Lab showed that bone preservation and direct targeting of RANKL were accompanied by a beneficial impact on muscle mass and strength. These results proved powerful enough to earn Dr. Bonetto a $2.2M R01 award from the National Institute of Arthritis and Musculoskeletal and Skin Diseases (NIAMS) to validate his findings.

In the next phase of investigation into RANKL as a novel factor in cachexia, the Bonetto Lab will look to apply these findings to other cancer types as well as to test bisphosphonates and anti-RANKL strategies in combination with traditional anticancer regimens with the goal of reducing their toxicity and improving outcomes in cancer patients.

Identifying and targeting individual factors, such as RANKL, is of vital importance in decoding the cachexia puzzle. However, Dr. Bonetto is quick to point out the big picture. “Many factors have been identified and targeted successfully at experimental level, but these findings have failed to fully translate in clinic trials. We must continue to look forward at identifying the big factor(s) which cause cachexia.” Personally, he wouldn’t be surprised if the ultimate solution was a simple one. “There are many factors that are known but have been neglected and it is my intention to look at these possibilities and investigate them fully.” Working from this perspective, that cachexia needs to be studied from all angles to be able to truly understand and cure the condition, the Bonetto Lab is working on many other lines of inquiry that also hold some promise.

One particular project involves the liver’s role in the muscle/bone crosstalk. The liver is a major endocrine organ and therefore secretes many factors that ultimately impact other tissues. With this in mind, Dr. Bonetto wondered how cancer impacts the factors being produced by the liver and, in turn, how these factors drive changes in muscle and bone. This systematic approach to the issue is novel in the field of cachexia research. Most studies have looked at factors directly caused by tumors versus those produced “downstream” as a result, or side effect, of tumor development. The results from this approach are promising. Looking at a multitude of models to identify liver derived factors, the Bonetto Lab has produced data showing a particular factor is prominent in bone resorption and skeletal muscle wasting. Dr. Bonetto is optimistic that these initial results will lead to additional external funding.

Moving forward, the Bonetto Lab is eager to collaborate and share their findings within the wider musculoskeletal and cancer research communities. Dr. Bonetto stresses “I am a big supporter of collaboration in science, and our current studies are a good example of this. In fact, every day we join forces with experts in muscle physiology, bone disease and metabolism from ICMH, IUSCCC and IU School of Medicine and get closer to finding a solution to the cachexia problem”.

Validating their current findings in models of other muscle conditions, such as muscular dystrophy and sarcopenia of aging, is of great interest in these collaborative ventures. The team is also already engaged with surgeons in the Department of Otolaryngology to collect muscle and bone samples from patients with head and neck cancers, in a study funded by the ICMH. Gene expression profiling and tracking changes in muscle function through use of the ICMH FIT core is also being explored.

As Dr. Bonetto continues to investigate cachexia from as many perspectives as possible, the end goal remains the same: discover safe and effective treatments for this devastating condition. While this lofty goal remains elusive, Dr. Bonetto is confident his lab is on the right track, “Despite the progress in the identification of new treatments for cachexia, unfortunately we do not have a cure yet for this detrimental comorbidity of cancer but I believe our approach of targeting the whole body and looking at the multi-organ crosstalk will succeed in isolating new targets for therapeutic intervention, which ultimately will improve quality of life for cancer patients”