In the Margins: Alzheimer's and LGBTQ+ Adults

There are laws that state you don’t exist. Even national organizations question who you are, placing labels on your chest like Hester Prynne.

As the 1960s roll in, you’re no longer invited home for the holidays and finding a job is difficult. You begin to keep more than just clothes in your closet.

By the time the 1970s arrive, you find people just like you. You find community and a hand to hold. Through revolution you discover that you’ve always been worth fighting for.

Even as the 1980s bring with it a pandemic, you and your comrades alter history. By the end of the 1990s, you change a nation.

You hold future generations on your shoulders as the new century arrives; because of you they’re reaching new heights, demanding more rights and as they march they cheer your name.

For the first time, the United States is able to witness one of the first generations of publicly “out” LGBTQ+ elders. For decades, these individuals have experienced insurmountable stigma and hindrances in receiving fundamental rights. Many grew up before Stonewall1 or when it was still considered illegal to be gay. Some were activists in large cities as others lived quietly in small, rural towns; however, the amount of prejudice they all witnessed can still be felt rippling through time, not least of which when accessing health care.

“I think that prejudice has led people in the LGBTQ+ community, particularly elders, to avoid health care,” said Alexia Torke, MD, professor of medicine at Indiana University School of Medicine and research scientist at the IU Center for Aging Research. “That’s part of the problem of why there are disparities in health: because of health care avoidance and fear of rejection.”

Many LGBTQ+ individuals fear retribution when seeking to find a primary care doctor or face obstacles in receiving health care benefits that cover same-sex partners and certain procedures. However, the situation is amplified as people age and become more and more dependent on others.

Torke, who led the initiative of drafting the

American Geriatrics Society Care of Lesbian, Gay, Bisexual, and Transgender Older Adults Position Statement, is also involved in a study looking into the needs and experiences of older LGBTQ+ adults with Alzheimer’s disease and their surrogate decision-makers. According to Torke, it’s nearly impossible to avoid the health care system as you develop a disease like dementia.

“As people age and develop Alzheimer’s, they become dependent on health care providers for medications, treatment and sometimes their residence,” she said.

Since the late 1960s, extensive research has been conducted in the search for treatment of Alzheimer’s disease. However, it wasn’t until 2018 that the first dementia-related data from a large population of LGBTQ+ older adults was reported2. According to researchers at University of California, San Francisco, more than 350,000 LGBTQ+ adults are living with Alzheimer’s disease or related dementia3. Additionally, researchers discovered that, after accounting for personal backgrounds, LGBTQ+ adults were 29 percent more likely to report subjective cognitive decline compared to their cisgender and heterosexual counterparts.

While it remains unclear why LGBTQ+ adults have higher subjective cognitive decline, many experts believe it may be due to higher rates of depression, loneliness, increased stress/ fear of prejudice and a lack of regular access to health care. Alzheimer’s is already a difficult disease to navigate, let alone for someone who’s also balancing a history of being discriminated.

LGBTQ+ adults are twice as likely to live alone and more likely than cis and heterosexual adults to not be married or have children4. On top of approaching the health care system with questions about dementia, LGBTQ+ adults and their caregivers also worry, ’Will the doctor be accepting? Will I be rejected? Will my sexuality jeopardize my loved one’s health?’

From researchers implementing new clinical trials to nurses dedicating their time and energy to each hospital bed—providing care is essential to medicine, but it’s also intersectional.

“Some patients aren’t entirely ‘out’,” Torke stated. “Maybe they have a photo of a long-term partner that would encourage positive memories, but the nursing home is unaware. Perhaps they hadn’t yet came out publicly as transgender and the clothes they wear in private help them see themselves for who they truly are.”

Whether it’s assisted living or a nursing home, a patient’s private and public worlds merge. As LGBTQ+ adults express their sexualities and gender identities in diverse ways, it’s absolutely essential that places of residence for older adults are LGBTQ+ friendly.

Listen to Torke on the last season of The Problem, a podcast produced by the Regenstrief Institute in Indianapolis. 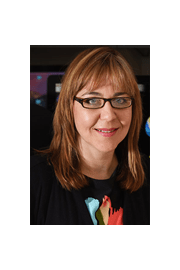 problem-solving, all high-level skills,” Apostolova said. “Without the ability to drive, how do you get your groceries or arrive to your appointments? My patients depend on other people to help them function. If one doesn’t have that support system, if there is nobody because of the stigma and attitudes toward someone who is LGBTQ+— it becomes really devasting for the patient.”

Apostolova also said that as LGBTQ+ patients are more likely to not seek care due to fear of prejudice, it prevents them from being properly diagnosed and treated. “If the health care system isn’t creating a safe and open space for all patients to receive equitable care, who’s paying attention to this patient population?”

Fortunately, many primary care physicians and health care systems have ensured their environments are comforting for the patient and their families. Mary Estrada and her wife, Peggy, would know. About four years ago, Mary was diagnosed with early-onset Alzheimer’s disease.

“My doctors are very supportive,”

Mary said.
“They all know I’m married to a woman. They don’t judge us or treat us differently. We’re really lucky to have that type of support and openness.”

Mary receives her primary care at IU West, is a patient of Apostolova’s and takes part in LEADS. Since receiving her diagnosis, she’s noticed her symptoms worsen but aims to find a positive outlook on her life and what she can control. “I have always believed in the power of positivity. Even if it doesn’t make the situation better itself, it makes me feel better and that matters,” Mary said.

When thinking about what other LGBTQ+ adults and their caregivers have experienced, especially if they’ve encountered instances of discrimination, Mary and Peggy encourage them to talk and relay their fears to their doctor. “Let them know how uncomfortable you are,” Mary said. “I think doctors will go the extra mile to put you at ease.”

“It’s a terrible disease,” Peggy added. “To have a positive experience and relationship with your health care provider is the very least that could happen.”

While recent years have seen improved rights for LGBTQ+ individuals, there are still many areas for health systems, medical institutions and senior care facilities to do more in creating equitable access to care for LGBTQ+ adults.

“We need to recognize that there’s a lot of damage people have experienced, especially for older adults throughout their long lives,” Torke said. “We need to mitigate those experiences and support people. We need to be overtly welcoming to people who have experienced a lifetime of prejudice.”

Programs like OutCare Health are helping IU School of Medicine lead this effort in Indiana. Led by third-year psychiatry resident, Dustin Nowaskie, MD, the organization recognizes the unique health care needs of LGBTQ+ people by connecting them with providers who have extensive knowledge and awareness of LGBTQ+ health care. Additionally, the Gender Health Program at Eskenazi Health continues to grow as it provides transgender and non-binary patients of all ages with a pathway toward receiving the care and knowledge they need as they make crucial steps toward their future.

For decades, LGBTQ+ older adults fought and hoped for change. From a lack of representation in Alzheimer’s research to combating a history of stigma, there’s no better time than now to ensure LGBTQ+ older adults are provided with adequate care that uplifts the life they fought so hard for.

Read previous stories shedding light on the disparities in LGBTQ+ health care, including representation in breast cancer research and the importance of medical education in a physician’s training of equitable care.

Each year, the IU School of Medicine hosts a two-day event designed for those within and outside the Indianapolis community to learn and better understand the unique barriers to health care for LGBTQ+ individuals.

Having joined IU School of Medicine in 2016, Sonder uses a poetry and theatre background to help bridge the academic world with the creative. A graduate of University of Evansville, he works with faculty and academic staff to formulate unique, marketing ideas that engage the public with innovative research at IU School of Medicine. From writing stories on groundbreaking equipment to orchestrating digital marketing strategies, Sonder collaborates with experts across the school to help departments thrive in their marketing and communication ambitions.