New findings could contribute to the early detection of Alzheimer's disease 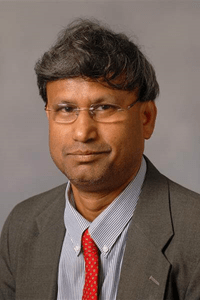 IU School of Medicine distinguished professor, Debomoy K. Lahiri, PhD, and his team found that “mis”-production of amyloid precursor protein (APP) in the brain contributes to the development of Alzheimer’s disease. Their findings were published in two successive articles in Molecular Psychiatry and Scientific Reports, which are both Nature publications.

Work from Lahiri’s team, including Ruizhi Wang, Kwangsik Nho, PhD, and Bryan Maloney, suggested that a patient’s body may be able to treat itself naturally by adjusting its levels of APP, which would have fewer side effects than using other kinds of treatment.

“As APP plays vital roles in neuronal health and does not exist solely to be the source of ‘pathogenic’ Aβ, the molecular etiology of Alzheimer's disease is likely to not just be a disease of ‘excess,’ but a disruption of delicate homeostasis,” said Lahiri. “Our discovery that reducing APP may result in reduced neuronal health could lead to, if coupled with very early detection, a treatment that could halt Alzheimer’s disease before it starts by restoring APP to healthy levels before the vicious cycle is started.”

Traditional medical approaches to Alzheimer’s disease consist of using drugs that specifically treat an outcome or symptom. The drugs, even if based on naturally occurring substances, such as rivastigmine (Exelon), which is currently used to treat mild to moderate dementia associated with Alzheimer's disease, do not naturally occur in the body. A treatment that consists of adjusting levels of a substance made within the body could provide a more effective outcome.

"Treating the symptoms of fully-emerged Alzheimer’s may be akin to shutting the barn door after the cows get out," said Lahiri. "By the time plaques or dementia appear, so much brain damage may have occurred that it cannot be reversed. Our team's findings point to a much earlier stage that could be practically reversed."

The recent discoveries pivot around the regulation of messenger RNA (mRNA) by microRNA. Two alternative therapies could be derived from this finding. First, a critical microRNA could be blocked by administering “antagomirs” to that sequence or target protectors that selectively block microRNA access to the APP mRNA. As a much more ambitious alternative, potential treatments could shorten the length of the APP mRNA’s three prime untranslated region (3’UTRs), which would then delete microRNA binding sites. While the former would use modifications similar to anti-cancer treatments already under investigation, mRNA 3’UTR modification would require changes in the genetic code of brain cells. With these strategies, researchers may be able to minimize the clumping of amyloid plaques and neurofibrillary tangles, which are believed to contribute to Alzheimer’s disease.

“MicroRNA manipulation in a cell-type and stage-specific manner could alter the target mRNA expression to cellular advantage." said Lahiri. “Future work would be very exciting to tease out these variables to set the stage for using microRNA as a potential treatment or intervention options.”

Lahiri has also been awarded several NIH grants for his ongoing work in Alzheimer’s disease, including: