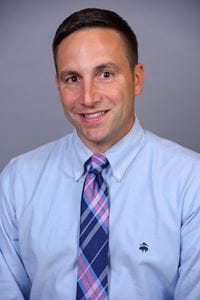 A new publication with contributions from an IU School of Medicine researcher could change the way doctors treat children diagnosed with Kawasaki disease. James Wood, MD, was the local lead investigator and one of the authors of a paper recently published in The Lancet: Child and Adolescent Health, called “Infliximab versus second intravenous immunoglobulin for treatment of resistant Kawasaki disease in the USA (KIDCARE): a randomised, multicentre comparative effectiveness trial.”

Even though Kawasaki disease is relatively rare, with fewer than 6,000 cases in the United States per year, it is among the most common causes of acquired heart disease in children. The condition is typically found in children younger than five years old, with symptoms including a fever, rash, swelling of the hands and feet, irritation and redness of the whites of the eyes, and irritation and inflammation of the mouth, lips and throat.

Kawasaki disease is typically treated with intravenous immunoglobulin (IVIG), which is made up of antibodies. When IVIG is given to a patient with Kawasaki disease, it can stabilize them within a few hours, as well as help suppress inflammation, but not all children respond to the treatment.

Kawasaki disease has been of public interest recently because some of its symptoms are similar to multisystem inflammatory syndrome in children (MIS-C), which has been associated with COVID-19. Patients with MIS-C are also treated with IVIG.

In a randomized clinical trial known as KIDCARE, researchers divided children who did not respond to the first dose of IVIG into two groups, giving one group a second dose of IVIG (which has been the standard of care for patients who do not respond to the initial treatment) and giving the other group a drug called infliximab, a monoclonal antibody which is typically used to treat autoimmune diseases such as Crohn’s disease and ulcerative colitis.

The researchers found that patients who received infliximab didn’t have a fever for as long, had less severe anemia, didn’t need as much additional therapy, and could leave the hospital sooner than those who received a second dose of IVIG. This nationwide study included 103 children who received treatment at 30 clinical sites, including Riley Children’s Health, which was the second highest recruiting site.

“Researchers have been trying to figure out the best treatment for children with refractory Kawasaki disease since the 1980s. This study gives us that information and will allow us to better treat our patients with the challenging disease,” said Wood, who is an assistant professor of pediatrics at IU School of Medicine, as well as an infectious disease specialist at Riley Children’s Health. “This study will change practice not only here at Riley, but across the United States.”