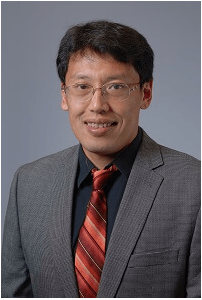 Pancreatic cancer is relatively rare when compared to other cancers, but still the third leading cause of cancer death in the U.S. with one of the lowest survival rates of any cancers. For that reason, much of pancreatic cancer research is dedicated to treating this deadly kind of cancer. Some of that innovative research is happening at IU School of Medicine in the Liu Laboratory for Computational Genomics. Yunlong Liu, PhD, director of the Center for Computational Biology and Bioinformatics at IU School of Medicine, has been conducting recently published research that could impact the development of more effective immunotherapy options for treating pancreatic cancer and even contribute to a vaccine for the disease someday.

“It’s a new source of antigens that can be used to fight cancers,” said Liu, who is a professor of medical & molecular genetics at IU School of Medicine and a researcher at the Indiana University Melvin and Bren Simon Comprehensive Cancer Center. “We never thought intron-retention was very important because our cells have inherent ways to get rid of RNA molecules with intron retention. But in this process, the cells generate peptide neoantigens that our immune system has never seen before.”

“Cancer cells are smart,” said Liu. “They know how to protect themselves from immune cells.”

And that’s where ICB, a type of immunotherapy, comes into the picture in treating some types of cancer. Immune checkpoint blockades or inhibitors work by helping the patient's own immune system recognize and fight their tumor. Pancreatic cancer does not have a lot of mutations, which are more common in other cancer types where the tumor mutation load is used as one of the eligibility criteria for treatment with new immunotherapy drugs. Thus, ICB has not been routinely used to treat pancreatic cancer patients.

“But this study gave us hints that ICB might actually be beneficial for certain pancreatic patients,” Liu said. “We found that patients with high IR neoantigens have improved overall survival. That triggered us to ask whether patients with high neoantigens and high immune inhibitor signals would benefit from ICB therapy. Because even though the cancer cells display neoantigens, the immune inhibitor molecules act as a shield to protect them from being killed by T cells.”