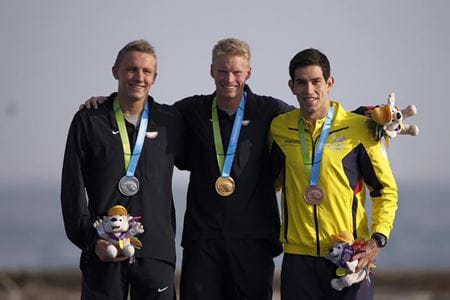 Many medical students take a gap year during their education, often to pursue research or other career-building opportunities. For Chip Peterson, he spent several years before medical school cultivating a different kind of career: professional open-water swimming.

“I was on the U.S. national team for open-water swimming,” Peterson said. “It just became an Olympic sport in 2008, and the Olympic distance is 10 kilometers. I grew up right on the water in North Carolina on the coast, and I did really well with those longer distances, even as a young athlete.”

Peterson achieved several accomplishments as a young swimmer, winning the U.S. and world championships in 10-kilometer open-water swimming in 2005. He completed his undergraduate degree at the University of North Carolina, where he focused more on pool swimming, winning the ACC championship in the 1650-yard freestyle. After graduating, he considered pursuing a PhD, but decided to spend a few years swimming full-time instead. 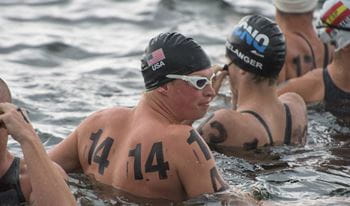 Unfortunately, some health issues made that career difficult.

“I had ulcerative colitis and ended up having a total colectomy during my time as an athlete,” Peterson said. “I narrowly missed a chance to compete in the 2008 Olympics for open-water swimming, partially because of an ulcerative colitis flare.”

Peterson was diagnosed while in college. He had to take some time off swimming to focus on healing. Eventually, he had a total colectomy, and was able to get back to training at the elite level, winning the gold in 10-kilometer open-water swimming at the Toronto Pan American Games in 2015.

“The surgery really turned things around and I didn’t have to worry about if tomorrow I will have a flare and if all the training I had been doing was just going to go down the drain,” Peterson said. “It was important for me to go back and continue training and get back to the elite level before moving on to studying medicine.”

It was the medical professionals who helped Peterson with his condition that made him want to attend medical school and eventually pursue a residency in urology. 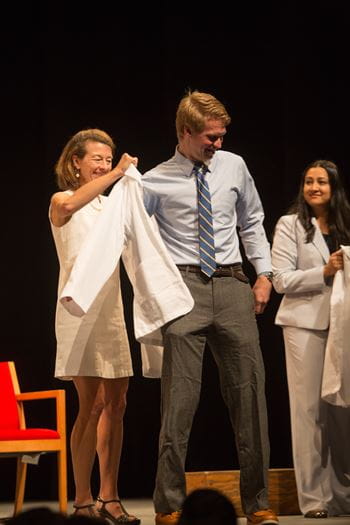 “I just came away from that experience with a large respect for medical professionals, and it led me toward a surgical subspecialty, too, just because of how great the surgeons were and how large an impact on my quality of life they had,” Peterson said. “I felt like in urology, more than any other specialty, it combines both the medical management where you develop long-term relationships with some of your patients, but you also have to do surgical planning and surgical intervention.”

Peterson will graduate from UNC School of Medicine in spring 2021. He recently matched with Indiana University School of Medicine Department of Urology for residency and will move to Indianapolis to start his residency in the summer of 2021. While he hasn’t had time to swim as much recently, he’s open to continuing to use his swimming skills in new ways over time.

“It’s a great sport because you can do it for a long time,” Peterson said. “It’s interesting to think about maybe trying open-water triathlon in the future. In North Carolina, I’m active with a group that gives swim lessons to foster kids, so doing that or finding a local team to get involved with is something I’d love to do when I can. Finding ways to give back to the community with the skills and knowledge I have would be great.”

Learn more about residency at IU School of Medicine Department of Urology.