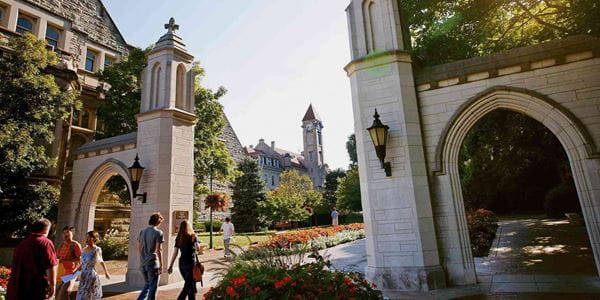 Indiana University School of Medicine is commemorating the 50th anniversary of its statewide campus system for medical education, established by the Indiana State Legislature in 1971. However, the history of medical education at Indiana University began a full century earlier. This series highlights the unique history of each regional campus and celebrates its distinctive learning environment and special programs.

Here, we look at the long history of medical training on the Bloomington campus and explore the current vision for IU School of Medicine-Bloomington that will help guide its next 50 years.

It may be no surprise that Indiana University’s earliest medical instruction took place on the Bloomington campus, but how did the medical school end up in Indianapolis? And when did the prevailing mindset in medical education switch from consolidation to decentralization, making Indiana a nationwide model for statewide medical education? Read on!

Among the eight IU School of Medicine campuses outside of Indianapolis, Bloomington is unique in having a medical sciences program that educates not only medical students seeking an MD, but also undergraduate students and graduate students in various programs leading to bachelor’s, master’s, PhD and combined degrees.

Now the new Regional Academic Health Center (RAHC), which opened on the Bloomington campus in late 2020, is generating excitement as IU School of Medicine faculty explore new possibilities for collaboration among colleagues in other health sciences professions and with clinicians at IU Health. The $557 million IU Health Bloomington facility will include a hospital, a cancer center and other specialty centers, and a state-of-the-art simulation center. The RAHC also will provide colocation of IU’s academic programs in medicine, nursing, social work, speech and hearing, and dentistry.

What manifests over the next five years will lead to more IU School of Medicine students staying in Bloomington for the entirety of their training and new residency programs opening for medical school graduates. There also will be greater opportunity for clinical research.

“By 2026, we will be graduating our first class of residents and will have filled some clinical educator staffing roles; we’ll be retaining more students as Phase Two learners in the medical school, have a more diverse panel of elective offerings that medical students from all over the state would be able to participate in, and have a larger clinical research footprint,” said Katherine Hiller, MD, MPH, associate dean and campus director of IU School of Medicine-Bloomington.

While this vision is shaping the future of medical education on the Bloomington campus, there’s a long history of medical training at IU Bloomington which has led to this juncture. 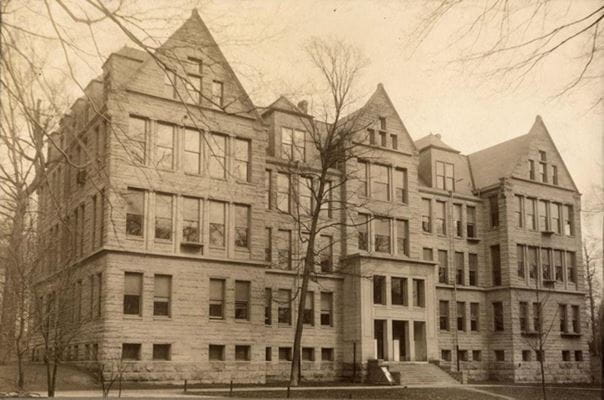 150 years of medical education in Bloomington

According to research by William Schneider, PhD, adjunct professor of medical and molecular genetics at IU School of Medicine and professor emeritus of history and medical humanities at IUPUI School of Liberal Arts, IU first offered medical instruction in 1871 through an agreement with the newly-established, private Indiana Medical College in Indianapolis; however, without state funding, that partnership program ended in 1876. 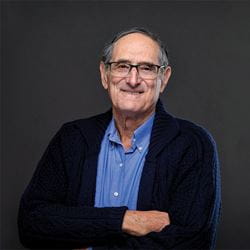 Medical instruction at IU resumed in 1903 with the university offering the first two years of foundational medical science in Bloomington. However, to complete their MD, students had to transfer to medical schools in cities like Indianapolis where there were adequate physicians and local hospitals for clinical instruction.

In 1908, the two largest medical schools in Indianapolis joined Indiana University, but the first year of medical instruction continued on the IU Bloomington campus, followed by three years in Indianapolis – a system that lasted for nearly 50 years. In 1937, a Medical Building was constructed in Bloomington (later renamed Myers Hall after the first medical faculty member hired by IU).

In 1958, as the medical school’s enrollment expanded, the first-year of medical instruction was moved to Indianapolis, where a new medical sciences building had been constructed, opening new research opportunities. This split the Bloomington faculty, with about half moving to Indianapolis and half remaining in Bloomington to form the Department of Anatomy and Physiology, according to research by Bruce Martin, PhD, a professor of anatomy, cell biology and physiology who’s been teaching at IU School of Medicine for 42 years. 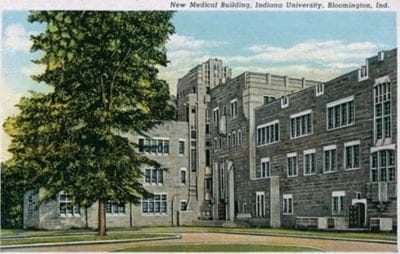 But this wasn’t the end of medical education in Bloomington. Inspired by a program at Stanford University and not wanting the medical building to go unused, IU President Herman B Wells secured funding for an advanced degree program in 1959 that combined the first two years of basic science courses for an MD with a master’s or PhD, said Talmage Bosin, PhD, Medical Sciences Program director and campus dean for IU School of Medicine-Bloomington from 1989-2005.

Medical students benefited from resources of the greater university community, pursuing unique scholarly and research projects in biochemistry, the liberal arts and other fields—opportunities that continue to exist today on the Bloomington campus.

The first class to enroll in the combined degree program consisted of just five students.

“It was a small start that ramped up over time,” Bosin said.

Faculty were recruited in areas like pharmacology and pathology, and clinical training was added in 1965 in partnership with Bloomington Hospital. Bloomington would soon become the model for medical education on regional campuses throughout the state.

From consolidation to decentralization

Up to this point, IU had invested heavily in Indianapolis, building one of the largest medical schools in the nation. But in the early 1960s, the political winds changed.

A projected shortage of physicians throughout the United States brought a push to increase enrollments in medical schools. Although IU increased admission of MD students from 158 in 1957 to 215 in 1965, calls for a second medical school were fed by ambitious politicians around the state, Schneider said. In response, IU pivoted away from consolidation efforts in Indianapolis and began looking for educational partners throughout the state to expand medical education.

The pilot program at IU-Bloomington became the model for programs at Purdue University in West Lafayette and Notre Dame University in South Bend in 1968, allowing about a dozen IU School of Medicine students to complete their first two years on those regional campuses before transferring to Indianapolis.

After several studies and much debate, IU School of Medicine proposed a plan to further expand the model to five other sites around the state, most of which had lobbied to be the location of a second medical school. In 1971, the state legislature established a Statewide System for Medical Education.

Implementation took time. By 1981, the first year of medical school was being offered on eight regional campuses throughout the state; by 1990, the second year was added, allowing half of the students admitted to IU School of Medicine to train on regional campuses before transferring to Indianapolis to finish their MD. Because of Bloomington’s faculty resources, it admitted twice the number of students than the other seven regional sites, Schneider said.

Faced with another call for more physicians in the early 2000s, IU School of Medicine responded by expanding medical instruction at the regional campuses to offer third- and fourth-year instruction. By 2014, all of the regional campuses offered full, four-year programs, allowing many medical students to complete their degrees without transferring to Indianapolis.

“This statewide system has no parallel in the entire United States,” Bosin said.