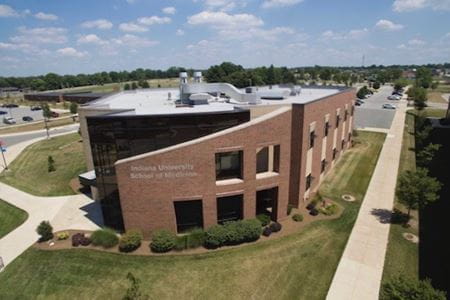 When Kathleen Rocco, MD, graduated from Indiana University School of Medicine-Fort Wayne in 2017 and headed to Toledo, Ohio, for residency training, she knew she’d be back.

Four years later, Rocco is beginning her career at Fort Wayne’s Lutheran Hospital—the very place she discovered her love of emergency medicine. Her first day on the job, Rocco saw the familiar faces of three of her former IU School of Medicine preceptors.

“It’s a super surreal feeling running into people I trained with as a medical student and coming back as a full colleague,” she said.

Rocco’s story is exactly what the visionaries behind Indiana’s statewide system of medical education had in mind 50 years ago when they charted a course for tackling a predicted physician shortage by expanding IU School of Medicine’s reach throughout the state. Today, about 43 percent of IU’s current medical students receive their education at a regional campus. 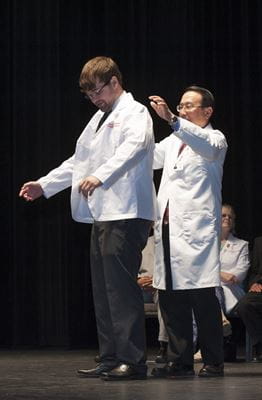 Back in 1981, IU School of Medicine-Fort Wayne was the “littlest sibling” among the eight regional campuses, opening a decade after campuses in Bloomington, West Lafayette, South Bend, Muncie, Terre Haute, Evansville and Gary. As the Fort Wayne campus marks its 40th anniversary, the success of the system is evident.

There are at least 50 IU School of Medicine-Fort Wayne alumni practicing in the area, many of whom volunteer as preceptors, helping train up the next generation of physicians in northeast Indiana.

The medical education program in Fort Wayne began with just four students, housed on the third floor of the Classroom Medical Building at Indiana University-Purdue University-Fort Wayne (IPFW). In 2018, IPFW split into Purdue-Fort Wayne and IU-Fort Wayne, with the IU campus retaining health sciences programs. Today there are about 90 medical students at IU School of Medicine-Fort Wayne. 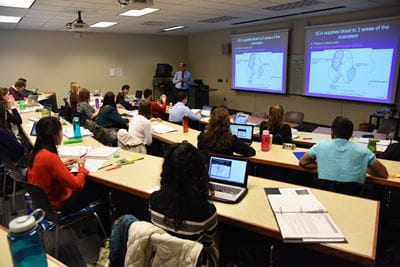 “IU School of Medicine-Fort Wayne started small with only four students and seven faculty members—imagine a 1-to-2 student-faculty ratio—but the vision was there, and they built an incredible program over the years,” said Gina Bailey, development director for the regional campus since 2008. “Medical students can now complete their entire medical education here, and a lot of them choose to come back to practice in Fort Wayne. So, it’s nice to see the full circle.”

In 1987, Ragatz became the campus’ second assistant dean and director. Under his leadership, the medical school developed a student research fellowship program, doubled the number of medical electives available to students, and established a cardiovascular research program and endowed professorship. Most notably, Ragatz successfully lobbied the Indiana state legislature for $12 million to build the Fort Wayne Medical Education Center, which doubled research capacity on the campus. In 2009, the medical school moved into its 43,000-square-foot Medical Education Building–a state-of-the-art clinical learning and translational research facility—and clerkships were added for third-year students. Today, 32 new medical students are admitted to IU School of Medicine-Fort Wayne each year, with more than 40 percent choosing to stay in Fort Wayne for all four years of medical school—as Rocco did.

Although she did a few rotations in Indianapolis, Rocco completed most of her clerkships in Fort Wayne, which has two major health systems—Parkview and Lutheran—as well as a growing IU Health presence and a veterans’ medical center serving the tri-state area. With more than 500 local physicians volunteering as adjunct clinical faculty, medical students can gain hands-on learning experiences in just about any niche of medicine they choose.

“There’s always a physician willing to train in any specialty of medicine that a student is interested in,” Bailey said. 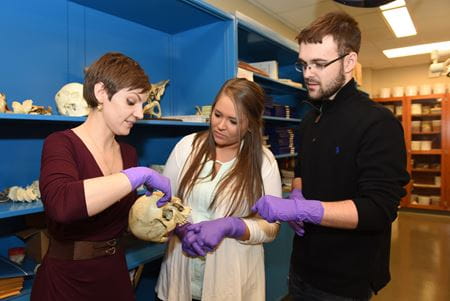 “The importance of research is not only the research itself—it trains students to strengthen their critical thinking skills. It teaches them how to solve problems,” said Jui-Hung “Jimmy” Yen, PhD, associate professor of microbiology and immunology at IU School of Medicine-Fort Wayne. He recently mentored two medical students who authored a paper on ischemic stroke.

Fort Wayne has one of the state’s longest standing summer research programs for medical students, dating back to 1988. More than 875 students have completed studies and presented their research at conferences, and many have been published in medical journals. This year, a student’s abstract was accepted for presentation at the upcoming American College of Surgeons conference in Orlando.

When Sweazey first came to IU School of Medicine-Fort Wayne in 1994, he was the only one doing neuroscience research. Now there are four active faculty laboratories and a dozen researchers, all focused on neuroscience fields, including Alzheimer’s disease, multiple sclerosis and stroke. 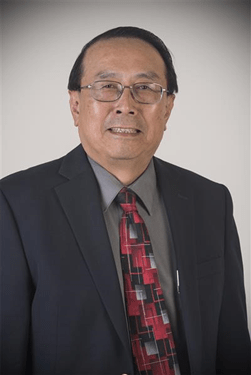 Chang, a practicing neurologist, became director of the regional campus in 2007 and brought a vision for IU School of Medicine-Fort Wayne to recruit faculty who would contribute to translational research in neuroinflammation and neuroimmunology—focusing resources on a singular field so the small campus could make a greater impact.

Prior to coming to IU, Chang recruited Sweazey to help test deep brain stimulation technology for Parkinson’s patients. The pair also worked together to do preclinical testing of the NeuroPace device, which was approved in 2013 to prevent seizures.

“We have such passionate researchers at our campus who are committed to trying to figure out the causes of neurological conditions and are really improving the lives of patients through targeted therapies,” Bailey said.

“It started with our interest in neurodegenerative diseases,” Sweazey said. “As people age, they require more integration across the health care system as they develop more comorbidities.” 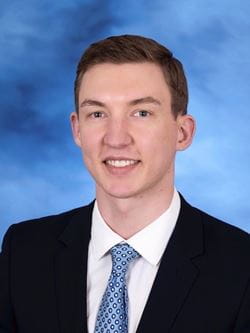 Having spent a year in a stroke lab doing bench research prior to medical school, fourth-year student Sam Stegelmann joined the scholarly concentration program to further explore his interests in neuroscience. He liked that the faculty in Fort Wayne had expertise in the field, and they supported him as he pursued an outcomes-driven project on treatment recommendations following acute ischemic stroke.

“I knew I enjoyed research and wanted to apply myself to an extracurricular opportunity to learn more about the public health side of health care,” Stegelmann said.

Seeing students like Stegelmann mature into well-rounded, competent physicians is what keeps Chang motivated. His vision is for the regional campus to become a hub of interprofessional education and health outcomes research.

Rocco has never regretted her decision to stay in Fort Wayne for all four years of medical school. She believes her experience at the regional campus better prepared her for residency. 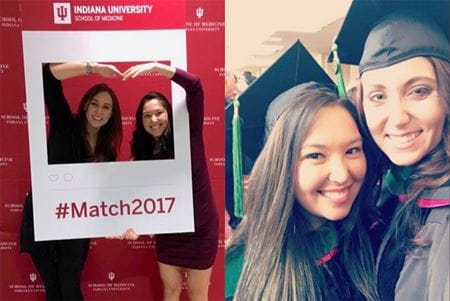 “You get to be one-on-one with attending physicians. I was first-assist on every single surgery I did in medical school,” Rocco said. “I did tubal ligations, vasectomies, I intubated people as a fourth-year medical student and did a lumbar puncture and sutures. I came into residency yards and meters ahead of my colleagues. A lot of them had never done an intubation or done sutures on anyone.”

Rocco’s medical school roommate, Ashley Berish, MD, also returned to Fort Wayne to practice after completing her residency at The University of Toledo in obstetrics and gynecology.

“There are med students who go through all of medical school without ever delivering a baby. I got to deliver babies and had a lot more surgical experience going into residency,” Berish said.

In the five years since Rocco and Berish graduated, IU School of Medicine-Fort Wayne has added the scholarly concentration program and significantly grown research opportunities. Five years from now, there will be several new residency programs—allowing more medical students to stay in Fort Wayne to train at northeast Indiana hospitals.

“We’re very fortunate to be in the Fort Wayne community because we have so many supportive members of the medical community that are excited to have the students here and want to teach them and help them find success,” Bailey said. “We keep evolving to make sure we’re providing students with the skillset they need to find success, both in residency and practice.”

Hear what IU School of Medicine-Fort Wayne students have to say about their experiences on this thriving regional campus. 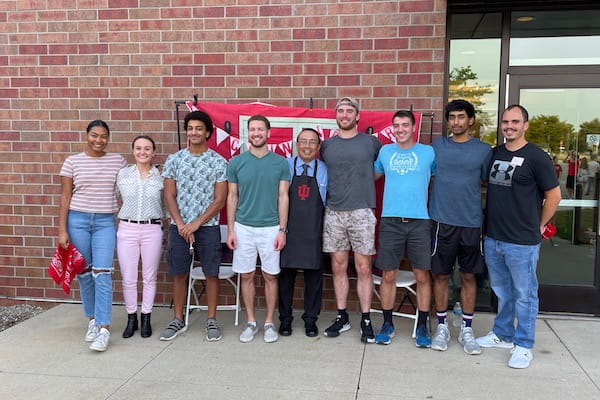