Zappia with his girlfriend, Taryn, and their dog, Enzo.

As a medical student, Jason Zappia quickly developed an interest in urology, and is celebrating a match with Indiana University School of Medicine Department of Urology residency this year. But it’s his own person experiences that made him want to become a urologist in the first place.

“When I was in college, my girlfriend kept getting urinary tract infections, and we’d go to urgent cares once or twice a month. No one ever really told us why she kept having them,” Zappia said.

Eventually, she fainted from a severe urinary tract infection that had affected her kidneys. A urologist was the one who found out she had a duplex collecting system that was causing the infections. She had a partial nephrectomy just before graduating college that solved the problem.

“The urologist who did the procedure actually did his residency training at IU,” Zappia said. 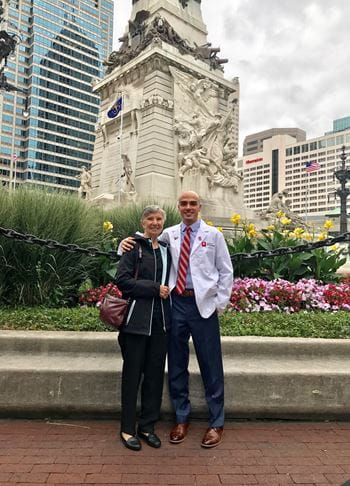 “That whole experience is what initially drew me to urology, and then I did a urology rotation during my third year of medical school and realized I really liked it.”

Zappia is originally from South Bend, Indiana and attended IU for his undergraduate degree. He took a year off before starting medical school and worked as a nurse aid in South Bend. Zappia will graduate from IU School of Medicine in May 2021 and start his residency over the summer. He said he’s excited to stay at IU for his urology residency training.

“This program compared to every other place I interviewed—the operative and clinical volume was second to none. People come here from all over the world to seek treatment, and that can’t be said about most urology programs around the country,” Zappia said. “A lot of the faculty and residents have been mentors to me since my first year of medical school, so it would be really hard to leave and go somewhere else.”

Learn more about residency training at IU School of Medicine Department of Urology.