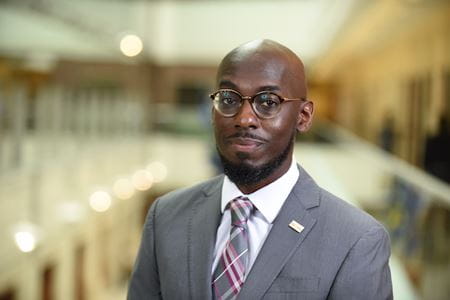 Richard Brown, MA, is an organizer—of people, of ideas, of actions. Once an aspiring politician, Brown has now found a place where his passions for social justice and organizational leadership align. In his role as assistant director for diversity initiatives at Indiana University School of Medicine, Brown leads faculty and staff training initiatives, works with the admissions office to improve diversity in recruitment, and mentors emerging student leaders.

“Richard’s personality is passionate and imaginative, and his character is straightforward,” said Alvaro Tori, MD, associate dean for diversity affairs. “He is supremely detail-oriented and an acute listener. He has a unique ability to harness his passion for DEIJ (diversity, equity, inclusion and justice) and convert basic visions into strategic programs assisting learners, faculty and staff—especially those who are from marginalized backgrounds—to attain success.”

Brown operates by the adage, “A twig can accomplish nothing, but a bundle can.” It’s a recognition of the power of united purpose. Applying this philosophy to IU School of Medicine, Brown’s vision is for every member of the school community to do their part to improve diversity, equity and inclusion. 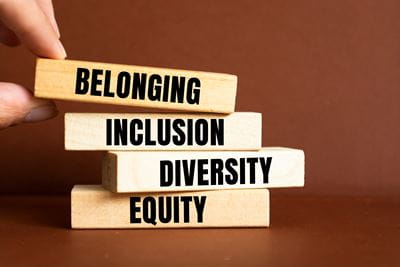 “Often times, when someone says ‘diversity,’ people think that’s somebody else’s job,” Brown said. “Every person needs to envision how DEI topics impact their work and be cognizant of their biases and be part of the team that moves their department forward toward the institutional priorities.”

In the height of racial unrest and protests in 2020, Brown helped the IU School of Medicine community start fruitful conversations by developing curriculum for a program targeting people who wanted to “do something,” but as members of non-minoritized backgrounds, didn’t know how to meaningfully contribute. Implementing Conversations to Advance Racial Equity (ICARE) has now helped over 200 individuals become DEI champions within their departments and offices.

“Consistent with my professional training and personal convictions, doing diversity, equity and inclusion work in the School of Medicine offers a unique opportunity for me to help address and shape systems, such as our health care system, which has not always been just,” Brown said. “This work continues my life’s work of addressing systemic barriers for the underrepresented and advocacy for the marginalized.”

Brown grew up on Chicago’s south side at the epicenter of the city’s Black life and culture—where political activist Jesse Jackson ran a non-profit advocating economic opportunity for Black and poor Americans, where cultural icons and activists Mohammad Ali and Louis Farrakhan owned homes, and where former President Barak Obama went knocking on doors for his first state congressional campaign.

“It was a diverse area with great wealth and great poverty just a few city blocks apart,” said Brown, who grew up in a multigenerational home with cousins who were like siblings. “That shaped how I see family—not the small, nuclear mom, dad and children, but as a village of folks sharing in labor, sharing love, sharing responsibility and even sharing in discipline.”

Brown’s maternal grandfather was one of his earliest role models. He was an entrepreneur who owned a hosiery business and then a soda pop business in Chicago’s South Loop. Every summer from the time Brown was nine or 10, he would become his grandpa’s sidekick.

“Being around him gave me a bigger vision about creating your own source of self-determination, or Kujichagulia, as expressed in Swahili and part of the Kwanzaa tradition,” Brown said. “Working with him over the summers taught me a really strong work ethic.”

Other role models weren’t personal connections but rather prominent Black men who inspired and shaped his vision of what he could contribute to the world. In 1983, Harold Washington became Chicago’s first African American mayor. Brown wanted to be the second.

“I really appreciated the way he told Black stories in a way no one else relayed them,” Brown said.

Brown attended a college-preparatory Catholic school, De La Salle Institute, named after the patron saint for teachers of youth. But he caught the vision to go to college through watching the 1980s sitcom “A Different World,” set at a fictional, historically Black college with main character Dwayne Wayne, whom Brown said “looked like me—tall, dark and thin with glasses—and helped me envision my own academic potential.”

“People can’t see themselves as successful until they see people like them who are successful,” Brown now believes. This aligns with IU School of Medicine’s commitment to representational diversity among faculty, staff and learners. 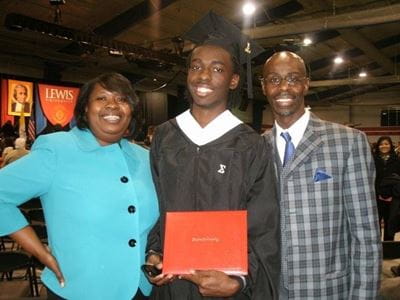 Although Brown’s parents attended community college, he was the first in his family to have the collegiate experience at a four-year university, studying political science at Lewis University, a small private school in west Chicago. He later earned a master’s degree from Lewis in organizational leadership and non-profit management. Now he’s working on a Doctor of Education in organizational leadership through Gardner-Webb University.

“College is this place of great ingenuity and ideas being born,” Brown said. “Everything is great, no one is hungry, everyone finds community and friendships. I really thrived in that space.”

Extending hope to the next generation

College was a utopia for Brown. But the world looked different when he returned to his Southside Chicago neighborhood. The housing bubble had burst, spurring a financial crisis that would lead to the Great Recession.

“Coming back home from college, people were losing their homes, people were hungry. It was jarring for me,” he said. “That really shaped my motivation for trying to provide some sense of hope to folks.” 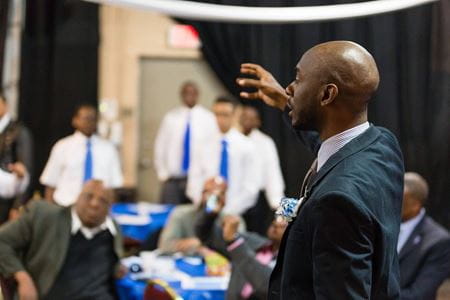 He founded a non-profit called Hope for a Better Tomorrow with a vision to facilitate and support programs which “inspire hope and leverage the marginalized citizen’s ability to achieve and succeed in society.”

“There’s a system in place that really undercuts individuals and makes it harder for people to succeed, especially people from certain zip codes or certain backgrounds,” Brown explained.

A major emphasis of the organization is its African American Male Initiative, an effort to foster a productive identity through training, college and career exploration, health fairs and the signature event, Manhood 101.

“I took responsibility for helping articulate positive Black identity because I think people will become what they see,” Brown said. “If they’re only told negative things about themselves, that has a residual effect on how they see themselves and how they respond to the world around them.”

Brown forged a large network of leaders and volunteers in his community. Dozens of successful Black men from different careers agreed to conduct mentoring sessions. The most recent pre-pandemic Manhood 101 event drew more than 200 participants, but the first such event wasn’t nearly as successful. Brown had all the pieces in place except one—his team failed to get the word out to would-be participants. 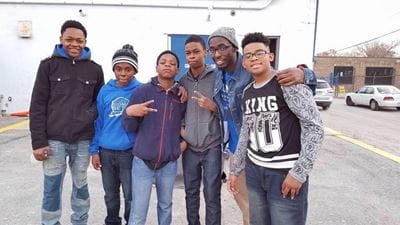 “We had dozens of Black men, ready to teach. We had a great facility at the local library. We had a great team of volunteers. We had decorations and snacks—but we had zero participants,” Brown recalled the disappointment. “Two or three young guys who just happened to be using the library came over and made use of our services.”

He’s learned few things about organizational leadership since then. And he’s worked to build a team where each member has unique responsibilities while working in harmony toward the organization’s shared vision. So, when Brown relocated to Indianapolis in 2018, he could be confident the work in Chicago would continue.

“It’s not my non-profit, but rather, it’s our non-profit,” he said. “So instead of me being the only one to articulate, champion and develop, I give space for other volunteers to take leadership roles, leaning much more in a collective approach to get things done.”

Brown was a college relations associate and adjunct instructor at Triton College in Chicago before becoming Black Student Services Coordinator at IUPUI in 2018. In that role, he supported the academic success of Black and other minoritized undergraduate students and served as an advocate for their leadership development. 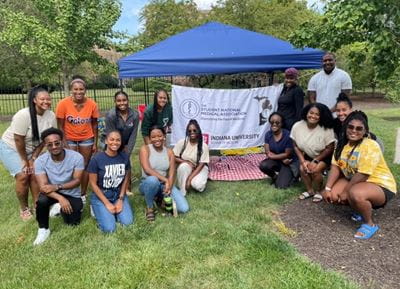 “I would have never made it out of college if it had not been for the Office of Multicultural Affairs at Lewis University. Now I am paying it forward and helping others find that same sense of belonging, community and support,” Brown said.

In his current role as assistant director for diversity initiatives at IU School of Medicine, Brown mentors student leaders from several diversity-affiliated student interest groups. He also serves as co-chair for the Black Faculty and Staff Council at IUPUI and is an adjunct faculty member in Africana Studies.

“Richard's dedication to student support is clear,” said third-year medical student Jordan Finch. “His commitment to supporting students in diversity-affinity student interest groups helps create a safe and welcoming space for students of disadvantaged backgrounds to be themselves and expresses their ideas and concerns.”

Vijai Dharla, outgoing president of the Alliance at IU School of Medicine, said Brown helps connect medical students with community organizations whose goals align with their diversity interests. “In all of my interactions with Richard, he has demonstrated respect and integrity,” said Dharla, a member of the LGBTQ+ community. “I am inspired by everything Richard does to help create a school that celebrates the diversity of its students. It is because of the work people like him do that I am thankful to be a student here.” 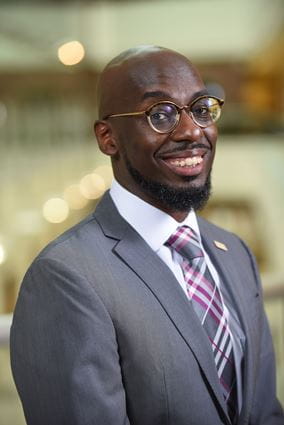 Brown also helps recruit and train faculty leaders through the iDREAM program, which serves as a pathway for medical residents from backgrounds underrepresented in medicine to achieve faculty appointments through professional development opportunities.

In 2020, IU School of Medicine launched Diversity Task Forces to look at DEI issues, including systemic racism, and Brown was highly involved in organizing and leading those conversations. IU School of Medicine recently announced plans to hire its first executive associate dean for diversity, equity and inclusion to provide strategic leadership, vision and direction for the school’s efforts to achieve inclusive excellence.

“Richard eloquently initiates the necessary conversations many are hesitant to conduct,” Tori said. “He generously shares his knowledge, encouraging people to become more versed regarding DEIJ topics. This builds the confidence they need to actively participate in forming an inclusive, equitable and just campus—thus creating DEIJ champions who will continue with his notable efforts for many years to come.” 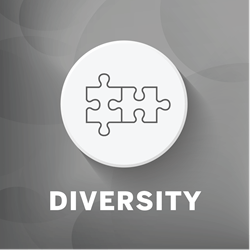 Members of the Indiana University School of Medicine community strive to uphold and elevate the core values of excellence, respect, integrity, diversity and inclusion, and cooperation. This is the fourth in a series of stories featuring IU School of Medicine faculty, staff and students who exemplify these values.

Diversity and inclusion are reflected in actions that appreciate and value all individuals. Members of the IU School of Medicine community are committed to creating a safe, inclusive and supportive atmosphere for teaching, learning, caring for patients and conducting research. IU School of Medicine commends Richard Brown for his enduring and impactful commitment to diversity and inclusion.