Pride Month: Why IU School of Medicine marches in the Indy Pride Parade The Indy Pride Festival is among thousands of Pride Month festivities happening around the nation in June. It kicks off June 11 with the Indy Pride Parade, and an enthusiastic delegation from Indiana University School of Medicine will be participating.

It’s not for optics. The medical school’s core values include excellence, respect, integrity, diversity and inclusion, and cooperation.

“As the largest medical school in the country, through our work in research, patient care and education, we have the power and the responsibility to be effective advocates for our LGBTQ+ patients and families and to understand the disparities and inequities that exist within the LGBTQ+ community,” said Alvaro Tori, MD, associate dean for diversity affairs at IU School of Medicine.

Colorful parades and festivities happen across the nation during Pride Month, which is celebrated in June to commemorate the event that catalyzed the gay rights movement. On June 28, 1969, police raided the Stonewall Inn in New York City, a popular LGBTQ+ gathering place. Countering this police harassment, about 400 people rioted, and protests continued for five days. The first gay pride march was organized in New York’s Greenwich Village in June 1970 on the one-year anniversary of the Stonewall uprising. 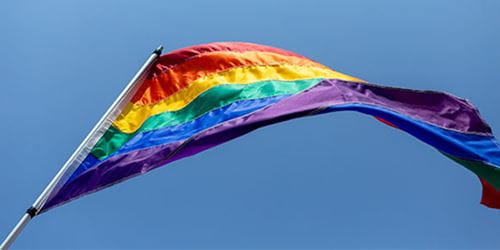 The first gay pride festival to be held in a public space in Indianapolis happened in June 1988. Today, the Indy Pride Parade is one of the largest in the nation, and the Indy Pride Festival attracts over 100,000 annual attendees.

IU School of Medicine will be represented among them.

“As a gay person myself, I would have never imagined that I would be walking in the pride parade next to the dean of the school and other school leaders. This has made me so proud to be who I am and to be working at IU School of Medicine,” Tori said. “I can’t wait to be part of this parade again, next to my husband and children as well as with the IU School of Medicine school community.”

According to a Gallup and Williams Institutes report published in 2018, 4.5 percent of Indiana adults identified as LGBTQ+ (about 300,000 people), including 0.56 percent who identified as transgender (about 27,600).

The IU School of Medicine Honor Code states its commitment to being “a place that is diverse, welcoming and inclusive for all” and to “identifying and dismantling hate.” And it puts action behind those words.

IU School of Medicine strives to provide the most equitable and justice-centered care possible for LGBTQ+ patients through many programs, including educational tracks focused on LGBTQ+ health care for medical students and residents, Tori said. Several faculty are members of the Eskenazi Health Transgender Health and Wellness Program and the Gender Health Program at Riley Children’s Health. And since 2017, IU School of Medicine has hosted one of the largest annual conferences focusing on LGBTQ+ health. 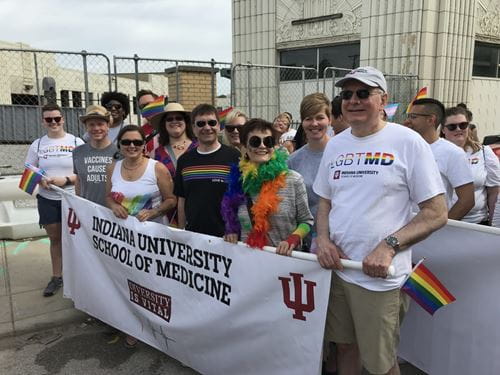 More than 1,000 people from around the world attended the virtual LGBTQ+ Health Care Conference on March 24-26, 2022. The event is designed for health care professionals, learners, researchers, patients, community organizations and interested community members seeking to better understand the unique health care needs within the LGBTQ+ population.

“As health care providers, it is our responsibility and privilege to provide the best possible care for every single person who comes to us. That takes a team effort,” he said.

Keynote speaker Carl Streed Jr., MD, MPH, assistant professor in the Boston University School of Medicine and research lead for the Center for Transgender Medicine and Surgery at Boston Medical Center, spoke on “Practicing in Hostile Times.” According to FBI statistics, hate crimes are on the rise, and 20 percent of those are related to sexual orientation, he noted.

Societal factors like anti-transgender legislation and other forms of discrimination contribute to the “minority stress” many LGBTQ+ individuals feel, Streed added. Anxiety and stress are well-documented risk factors for many diseases including hypertension, diabetes, heart disease, substance abuse and more. 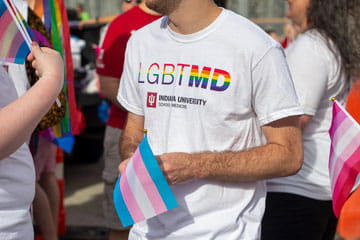 “We participate in the Indy Pride Parade because we want to show solidarity and strong support for this community that has been historically marginalized, not only in health care but within our society as well with discriminatory laws, policies and practices,” Tori said. “We want to show this community that we love them, we support them, we welcome them, and we will stand up for them.”

Register to join IU School of Medicine at the Indy Pride Parade.