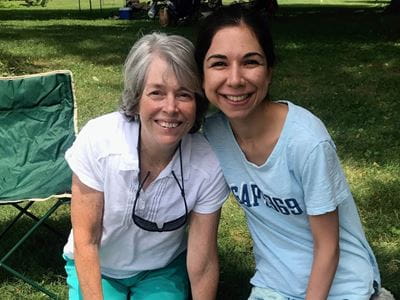 Shortly into the pandemic, Hande Karahan, PhD, and Nancy Carpenter, the donor of a fellowship that supported Karahan’s research a year prior, decided to reconnect.

They could only meet outside, several feet apart, and spent their time together on long walks, hiking in local parks and visiting horses. Those walks and talks in nature have since led to a strong friendship, a connection both say has changed their lives for the better.

In January 2020, Karahan, the recipient of the 2019 Sarah Roush Memorial Fellowship in Alzheimer’s Disease Research, presented her project to Nancy and James Carpenter, Tom and Dianne Trauring and several Indiana University School of Medicine Alzheimer’s researchers.

The fellowship, established by the Indiana Alzheimer’s Disease Research Center, is funded through a generous donation from the Carpenters and a matching contribution from Stark Neurosciences Research Institute. Nancy Carpenter and Dianne Trauring are the daughters of Sarah Roush, who died of Alzheimer’s disease in 2010. 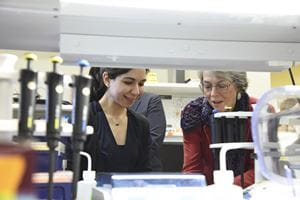 Carpenter said she was impressed with how Karahan presented the science behind her Alzheimer’s disease research to a lay audience, and she enjoyed Karahan’s “sweet demeanor and smile.”

“I kind of thought originally that I would reach out to her in case she needed a ‘mom type person’ being so far away from Turkey and her mom,” Carpenter said. “Very quickly it evolved into a real friendship of mutual respect, and we enjoyed talking, sharing and laughing.”

Karahan, assistant research professor of medical and molecular genetics, is Turkish and, and she moved to the United States in 2017 as a postdoctoral researcher at the Mayo Clinic, working for the laboratory of Jungsu Kim, PhD. Kim, the P. Michael Conneally Professor of Medical and Molecular Genetics, moved his laboratory to IU School of Medicine in 2018.

Typically, when donors make contributions to research, Kim said, the transaction is mostly financial. Being the Sarah Roush Fellow significantly helped Karahan financially and scientifically, she said, but the major gain from the fellowship was her friendship with Carpenter. 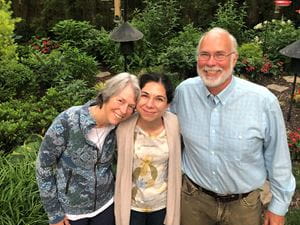 “This was a human connection; it wasn’t just financial support,” Karahan said. “Nancy and Jim have become my family here in the United States.”

Kim said that while the pandemic has been difficult for most, it’s especially hard for foreign-born postdoctoral researchers living thousands of miles away from family.

“I’m so grateful they’ve provided Hande with emotional support,” Kim said. “I think that’s the most important type of support she could’ve received from a donor.”

“I enjoyed watching her progress from the sidelines, taking photos and cheering her on,” Carpenter said. “I knew it would be meaningful for her to have photos to send to her family.”

They’ve also spent time hiking in parks and learning from each other’s cultures. Karahan has made Carpenter Turkish food and taught her how to make Turkish coffee, while Carpenter taught Karahan how to make maple syrup. They try and meet up multiple times a month and often visit Newfields. 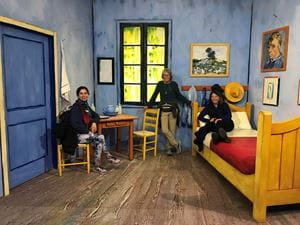 As their friendship has grown over time, the roots are grounded in Alzheimer’s disease research. Carpenter’s mother, Sarah Roush, started showing signs of the neurodegenerative disease at the age of 70. The disease also took hold of her grandmother decades earlier.

“My mom would be so honored, and she would have loved Hande so much,” Carpenter said.

Close to 55 million people worldwide—including more than 6 million in the U.S.—are estimated to have Alzheimer’s disease or related dementias, according to the World Health Organization. In the U.S., that’s expected to rise to about 13 million people by 2050.

Since the first Sarah Roush fellow was chosen in 2017, the program has helped propel the careers of six young Alzheimer’s disease researchers at IU School of Medicine.

Karahan’s research that was supported by the fellowship investigated the function of a gene associated with Alzheimer’s disease in the brain’s immune cells. Last year, Karahan published her study in a high-impact paper and received three separate grants supporting her research from the National Institute on Aging, the National Institutes of Health (NIH) branch for Alzheimer’s research, resulting in $7.8 million over the next five years.

When Karahan heard her paper was accepted, she first called her parents and then Carpenter.

“None of us could imagine that this project would lead to that strong of a relationship,” Karahan said. “Their fellowship led to really big grants and will definitely affect the future of our projects and our lab; but also personally, it changed my life, too.”

Karahan said Carpenter has been a calming presence to her when she’s been stressed about her research or about the pandemic, providing Karahan with wisdom and encouragement.

“If I have a small part in helping her attain her goals, I feel very happy and gratified by that,” Carpenter said. “She’s a special person and has been a gift to my life.”

Ben Middelkamp is a communications coordinator for Indiana University School of Medicine, where he supports Stark Neurosciences Research Institute and the Department of Otolaryngology—Head and Neck Surgery. Before joining the Office of Strategic Communications in December 2019, Ben spent nearly six years as a newspaper reporter in two Indiana cities. Having earned a bachelor’s degree in Convergent Journalism from Indiana Wesleyan University in 2014, Ben enjoys translating his background in journalism to the communications and marketing needs of the school and its physicians and researchers.