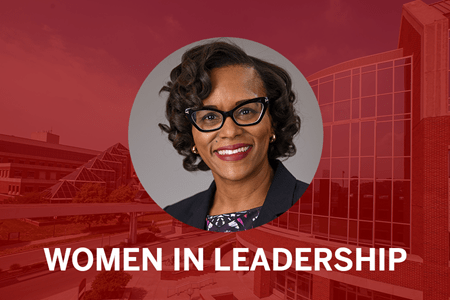 Brownsyne Tucker Edmonds, MD, MPH, MS, has learned from many incredible mentors throughout her career journey as an obstetrician-gynecologist, educator and researcher. Sadly, due to longstanding racial and gender inequities in academic medicine, most of her mentors have not been Black women.

“There is no shortage of genius or capability in communities of color,” she said. “So much of it is wrapped up in opportunity.”

Looking back on her own educational and career opportunities, Tucker Edmonds realizes that “but for the grace of God,” her life might have turned out much differently. Her parents set an example of working hard and seizing opportunities, which she has followed. But talent and personal ambition can be hindered by cultural biases and systemic racism.

“As a Black woman, one of the challenges of trying to navigate predominantly white spaces is not always feeling a sense of belonging and feeling the risk of what it means to be authentic in spaces that were not built for your safety or for you to thrive,” said Tucker Edmonds, associate dean for health equity research at Indiana University School of Medicine.

Her nationally recognized research explores issues of health equity in obstetrics, examining how race, class and culture influence patients’ health decisions leading up to childbirth and in the postpartum period. The goal is to develop support for minoritized patients in perinatal decision making.

“Brownsyne’s research has taken a humanistic approach to the most complicated of medical scenarios,” said Anthony Shanks, MD, MS, vice chair of education for the Department of Obstetrics and Gynecology. “She has strived to identify approaches that would benefit patients from marginalized or minority groups. This challenging work is vital and directly impacts the community that we care for.” 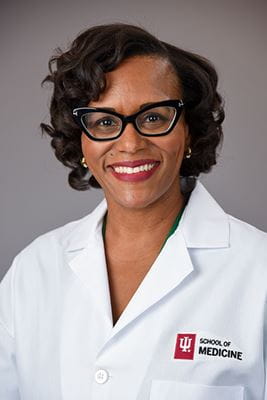 “Through her passion and dedication, I know that she will help us build research programs that will help reduce disparities in health care delivery,” said Tatiana Foroud, PhD, executive associate dean for research affairs at IU School of Medicine.

In addition to her role at the medical school, Tucker Edmonds serves as IU Health’s inaugural chief health equity officer, aiming to improve the experience and outcomes of patients from traditionally marginalized and under-resourced communities.

“I’m very excited for the attention on health equity at this moment, with a set of factors converging to really move the needle; however, I’m aware of a very, very long and entrenched history of inequity,” Tucker Edmonds said. “Whether or not we will be successful in this endeavor is going to be about the sustained commitment. It will require that we really examine our processes and our policies and our infrastructure and the ways those elements are either undermining or advancing the cause of health equity.”

“Who my parents are is as important as anything about who I am,” Tucker Edmonds said. “They were the first in the family to have the opportunity to get a higher education.”

Both from Memphis, Tennessee, her father and mother came of age at the height of the civil rights movement. They were among the first cohorts of Black students to integrate their colleges, requiring police escorts to and from the campus. The night before Martin Luther King Jr. was assassinated, Tucker Edmonds’ mother was sitting in Bishop Charles Mason Temple, listening to his last speech. 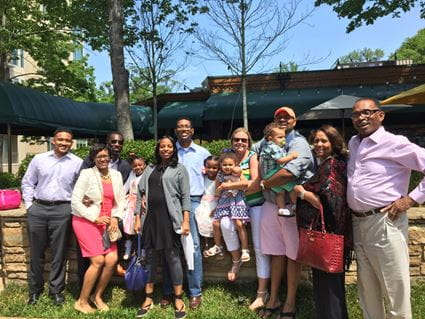 “My parents were not activists; they were just teenagers growing up in a moment where all of this was unfolding around them,” Tucker Edmonds said. “Integrating campuses wasn’t activism for them—it was just seeing a door open and pursuing it. But pursuing opportunity and joy and betterment as Black people in this nation, for a very long time, has been a radical, revolutionary act.”

Her mother became a special education teacher, and her father, who initially worked in pharmaceutical sales, went on to become an OB-GYN physician. Tucker Edmonds and one of her siblings would follow in his footsteps.

She admires her parents’ courage in pushing through doors that were opening just a crack. None of their siblings were able to seize the same opportunities.

“They had some siblings who fell prey to a lot of the challenges that come with poverty, inequity and structural racism,” she noted. “I had family members—my loved ones—who were interfacing with the criminal justice system, substance abuse, teenage pregnancy, intimate partner violence. People live hard lives, and these are good people who are constrained by difficult choices. I always carry that with me as a physician. My patients all have different lived experiences.

“There are so many communities that have been undermined at every step, hindering their ability to contribute their full talents and genius. That’s the injustice.”

Tucker Edmonds’ interest in health equity started early. As an undergraduate student at Brown University, she did a senior thesis in epidemiology on racial bias in contraceptive counseling. She later earned a master’s in public health from Harvard between her third and fourth years of medical school at Brown. 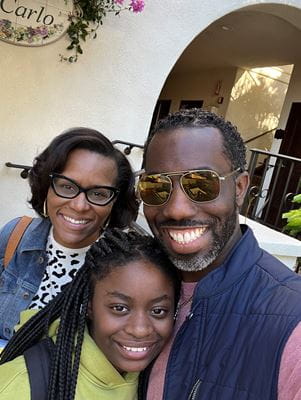 That same year, she got engaged to Joseph Lennis Tucker Edmonds, PhD, MDiv, who is now associate director of the Center for the Study of Religion and American Culture and an associate professor of Religious studies and Africana studies at IUPUI. They have an 11-year-old daughter, who unsurprisingly shows “great negotiation and leadership skills.”

“I really got sold on the value of being able to give voice to patients—women and under-represented populations in particular,” said Tucker Edmonds, who went on to complete a fellowship in health services research at the University of Pennsylvania.

While Tucker Edmonds didn’t encounter many research mentors who looked like her, the then associate dean for minority affairs at Brown Medical School, Alicia Monroe, MD, was an accomplished Black academic physician who served as a mentor for leadership during the eight years Tucker Edmonds was at Brown in the combined BA/MD program.

“I’ve had fantastic mentors all along the way, but most have not been Black women,” she noted. “My research mentors have oftentimes been white men, several of whom have been incredible partners and allies.”

Tucker Edmonds advises junior faculty to “find a mentor who is invested in your success,” whether or not that person looks like you. And she offers this admonition for colleagues of all races and the ethnicities who are in positions of seniority: “Do the training and learn about multicultural and cross-cultural mentorship. That work shouldn’t always fall to the more junior person who is disadvantaged in the power dynamic.”

As Tucker Edmonds has advanced to positions of leadership, she has discovered the value of peer mentorship. When she was in residency, the chair of Duke’s OB-GYN department was Haywood Brown, MD, one of the few Black department chairs in the country. Under his leadership, an unprecedented number of Black residents entered Duke’s program, and Tucker Edmonds remains close to a cohort of six Black women who trained together there.

“I’ve started to move into spaces where there’s less representation of Black women, but more need for guidance in how to navigate those spaces,” she said. “It’s important to find community and build out those peer networks, especially for minoritized folks. Sometimes you have to build a support network outside of your department or institution. It’s key to have a community of peers who have shared experiences and can help you navigate challenges.”

Sustaining the commitment to health equity

In her early career as an academic physician, Tucker Edmonds was advised to be protective of her time and stay focused to meet tenure-track benchmarks. As she advanced, she found herself wanting to “pay it forward” and fell naturally into mentoring and assisting trainees of color.

In 2017, she became assistant dean for diversity affairs at IU School of Medicine. In that role, she initiated the Program to Launch URiM Success (PLUS), a two-year cohort program in leadership and scholarship designed to support career development for underrepresented in medicine faculty. 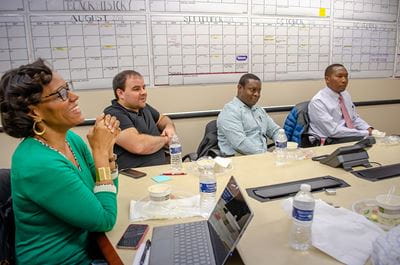 “That intersection of professional development with diversity, equity and inclusion—that’s the sweet spot for me where I really find a lot of joy and fulfillment in the work that I do,” she said.

On the state and national level, Tucker Edmonds is active with the American College of Obstetricians and Gynecologists (ACOG). As immediate past chair and past legislative affairs chair of the Indiana chapter of the ACOG, she has helped lead advocacy efforts for legislation to improve access to maternity and reproductive care for Hoosier women. In 2020, she received the Outstanding Community Engagement Award from the Faculty Community Relations Committee at IU School of Medicine. 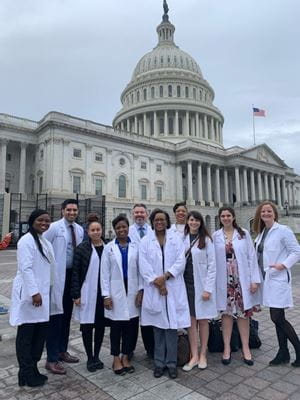 “Dr. Tucker Edmonds brings outstanding training, tremendous intellect, and diversity of experience and perspective to bear on questions of research, policy and health equity, thereby representing the very best of what we hope to promote and foster as we invest in the future leaders in our field,” said Jeffrey Peipert, MD, chair of the Department of Obstetrics and Gynecology at IU School of Medicine.

Whether in the community, in clinical practice or in medical education, Tucker Edmonds has consistently found—or created—ways to improve the lives of patients, learners and colleagues, supporting those who may be marginalized in academic medicine or the health care system.

“You have to roll up your sleeves and be really committed to questioning your institutional culture and decide if we’re going to be able to be disruptive and do things differently in our health system and our academic center,” she said. “That sustained commitment is what will shift our culture and transform inequities in our state.”