To schedule an appointment with an IU School of Medicine faculty gastroenterologist, contact Indiana University Health at (317) 944-0980 or through the Find a Doctor portal.

IU Health University Hospital is a state-of-the-art referral center for gastroparesis, a syndrome associated with a delay in stomach emptying. The most common causes are diabetes and surgical procedures injuring the vagus nerve. However, the cause is unknown in over 40% of adults with gastroparesis. Patients suffer from chronic nausea, vomiting, bloating, dehydration, and weight loss. In some patients, feeding tubes and IV nutrition are needed. IU School of Medicine faculty experts offer a unique multidisciplinary clinical and research approach in improving the lives of these patients.

The gastric electrical stimulator (GES) is a device used for gastroparesis that delivers electrical pulses to the stomach muscles and stimulates the vagus nerve signals to the brain. In some patients, it can relieve nausea and vomiting that have not improved with dietary changes and medicine. A surgeon places the stimulator under the skin of the abdomen and two lead wires connect it to the stomach muscles. Initial settings are placed at this time but can be adjusted if needed.

The GES program is led by John Wo, MD, director of the GI Motility and Neurogastroenterology unit in the Division of Gastroenterology and Hepatology. The program collaborates with colleagues in GI psychology, laparoscopic surgery, the neuroscience autonomic lab, medical genetics, GI radiology, and GI neuromuscular pathology. 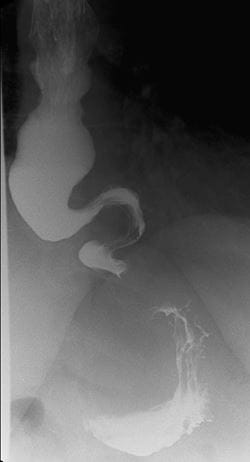 G-POEM is a minimally invasive procedure performed under general anesthesia to treat disorders of stomach emptying. During G-POEM, a thin, flexible tube is inserted into the stomach. An incision in the stomach to creates a tunnel in order to reach the tight pyloric muscle. Once the tunnel is created, an incision called myotomy is performed on the muscle. This myotomy helps enlarge this opening for food to pass freely into the small intestine. This procedure does not work on everyone, so it is important to explore all options.

POEM is a minimally invasive procedure performed under general anesthesia to help treat swallowing disorders such achalasia and diffuse esophageal spasm. During POEM, a thin, flexible tube is inserted into the esophagus. An incision in the wall of the esophagus helps create a tunnel into the upper stomach. Using this tunnel, an incision (called myotomy) in the muscle of the lower esophagus enlarges the muscular opening (called a sphincter) for liquids and foods to pass easily into the stomach.