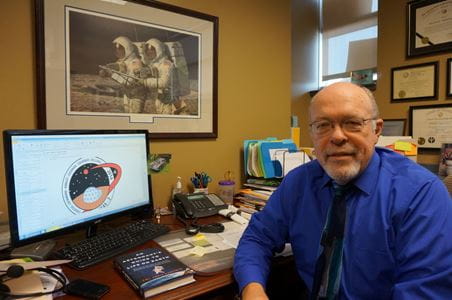 FORT WAYNE, Ind. — Ronald Williams was only 4 years old when Sputnik flew over his home in Bloomington, Ind., but he vividly recalls seeing the Russian satellite, the first to orbit the Earth and the mission that initiated the space race between the United States and the Soviet Union.

At that time, Dr. Williams wasn’t aware of the politics involved, but he said he has “direct memories” of the event. “I even remember the porch I was standing on and everything,” he said. That was his first step in a lifetime of fascination with space exploration that has taken him to the Kennedy Space Center 28 times. But those were baby steps compared to the giant leap he is taking in March when he heads off to Mars — or at least as close as humans have gotten so far.

His Mars outpost actually will be a simulated space station situated at 8,000 feet above sea level in an abandoned quarry on the northern slope of a volcano on Hawaii Island. The lava fields on Mauna Loa have little vegetation and are said to be about as similar to Mars’ terrain as can be found on Earth.

Dr. Williams and five other scientists will spend four months in a domed facility designed to simulate a space mission on the Red Planet. While there, the scientists will conduct experiments inside and outside the geodesic dome. But when outside the environmentally controlled space station, they will be wearing space suits equipped with oxygen.

“My childhood dream came true when I was selected for this project,” Dr. Williams, who is a volunteer clinical professor of neurology at Indiana University School of Medicine-Fort Wayne, said.

Although he did not pursue a career in space exploration, he spent many hours as a child with friends learning about the space program. The summer he was 12, Dr. Williams and his friends built a mockup of a Gemini space capsule out of wood and equipped it with pilot seats that looked surprisingly like lawn chairs.

“We had two-man crews and would take turns spending time in there, sometimes for several days,” he said. The summer heat forced them to scrub that mission, but the memory remains.

As director of the neuropsychology department at the Fort Wayne Neurological Center, Dr. Williams has observed space exploration as a hobby with little hope of ever going into space.

Then, a friend and fellow childhood “Gemini astronaut,” Steve Flinn, a computer scientist in the Indiana University Bloomington Department of Political Science, contacted Dr. Williams to tell him about a project supported by NASA known as the Hawaii Space Exploration Analog and Simulation, or HI-SEAS.

Williams applied for the first mission in 2013. But when he did not make the final cut from a field of 800 applicants, he put the dream behind him. The first mission, one of four planned by NASA at a total cost of $2.2 million, involved food and food preparation for use in space missions.

Then, in October, Dr. Williams was contacted by the Mission 2 organizers and asked if he would reapply. The new mission focuses on psychology and behavior and how they are affected by restrictive conditions similar to a manned mission to Mars.

This time, Dr. Williams was selected as one of six prime crew members — there are three backup crew members — and at age 60, he is the oldest of the group. The others, whose ages range from late 20s to mid-30s, include two other men: a physicist from Alberta, Canada, and a pilot-navigator for the U.S. Air Force from Ohio. The three women in the crew include two space scientists from France and the University of North Dakota Human Spaceflight Laboratory, and a chemical engineer from Florida.

The scientists will live in a geodesic dome that is 36 feet in diameter, with common spaces such as a kitchen, dining area, bathroom with shower, and lab and exercise spaces on the lower level. On the upper level are six crew sleeping quarters.

Dr. Williams, who will blog about his experiences, said he will be observing group dynamics and how the individual crew members respond to situations unique to that type of confined living.

“I will have a number of research projects involved with group dynamics such as mood changes, changes in work performance, changes in sleeping patterns, and leadership dynamics,” he said. “I also will be evaluating how broad spectrum lighting will impact sleeping.

“I’m an amateur astronomer, and one of my projects is to determine how best to look through a telescope eye piece with a space helmet on,” he said. Another of his projects involves his hobby as a ham radio operator, and he will encourage amateur radio contacts with the HI-SEAS crew and impose the 20-minute reception delay between Earth and Mars.

Dr. Williams will leave for Hawaii in mid-March. The mission begins March 21 with a week of training. On March 28, he and the other crew members will be transported to the isolated location, where they will remain until July 28.

“I am looking forward to interacting with a bunch of other really bright and enthusiastic space-loving people,” Dr. Williams said. “What am I dreading: serious cabin fever and white walls, all white walls. I will miss my friends and family and summer rides on my motorcycle and in my antique cars.”

Dr. Williams will be taking a piece of his astronaut-centric childhood with him: a blanket his mother bought him when he was in second grade that features astronaut John Glenn and the Friendship 7 spacecraft he piloted to become the first American to orbit the Earth.

“As a child, I knew the names of all the astronauts and their spacecraft and missions like some boys know the names of baseball players,” he said. Dr. Williams’ first love will take him to Mars, but unlike his Gemini adventure, this time his mission reports to NASA.

IU School of Medicine graduates physicians, scientists in Class of 2019
Match made in medicine