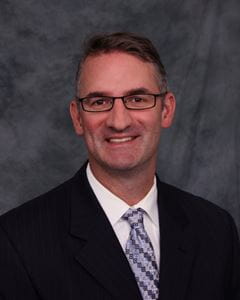 INDIANAPOLIS — Although U.S. military veterans who have returned from Iraq or Afghanistan are more likely to suffer chronic pain than veterans of any other conflict in American history, little headway has been made in helping them manage the often debilitating effects of chronic pain. A new study by researchers from the Richard L. Roudebush VA Medical Center in Indianapolis, the Regenstrief Institute and the Indiana University School of Medicine reports that a stepped-care strategy improved function and decreased pain severity, producing at least a 30 percent improvement in pain-related disability.

“Pain is disabling and interferes with daily living as well as the ability to work,” said Matthew Bair, M.D., the VA and Regenstrief Institute investigator and IU associate professor of medicine who led the randomized controlled ESCAPE trial — short for Evaluation of Stepped Care for Chronic Pain. “It is a critical health issue among veterans, many of whom had multiple, often lengthy deployments.

“Many have significant long-term pain. We know that medications alone are only modestly successful in helping them; current pain treatments haven’t made much of a dent. The decrease in pain severity and 30 percent improvement in pain-related disability we achieved in the ESCAPE study are clinically significant, and we found that improvement lasted for at least nine months.”

Dr. Bair is an internist who treats veterans in primary care and is a health services researcher. Previously he served for eight years as a U.S. Army physician.

The first step involved 12 weeks of medication treatment ranging from acetaminophen or naproxen sodium to opioids, coupled with pain self-management strategies such as deep breathing and other relaxation techniques. Step two involved 12 weeks of cognitive behavioral therapy drawing upon evidence-based psychological treatments for both pain and depression.

The ESCAPE program was provided over the telephone by nurse care managers. They worked with the veterans to help counter maladaptive thought and to help them better understand that while they might not be able to continue rigorous activities that they had enjoyed before deployment, a substitute activity like swimming might be achievable and decrease their pain.

Those who received the two-step ESCAPE program saw improvement in their function and a decrease in their pain severity and pain interference, or how pain interferes with mood, physical activity, work, social activity, relations with others, sleep and enjoyment of life.

Study patients randomized to usual care received educational handouts on musculoskeletal pain and were advised to discuss their pain with their physicians. These patients continued medications, clinic visits, specialty referrals and other care as usual.

All veterans in the study had suffered from moderate to severe chronic pain for more than three months. Veterans with current substance or alcohol dependence were excluded from the study, as were those with active suicidal ideation, active psychosis or schizophrenia. Two-thirds of the trial participants had served in the army, 88 percent were male, and 77 percent were white. The mean age was slightly under 37 years.

“Evaluation of Stepped Care for Chronic Pain (ESCAPE) in Veterans of Iraq and Afghanistan Conflicts: A Randomized Trial” appears in the March 9 issue of JAMA Internal Medicine.

According to the authors, ESCAPE challenges existing treatment paradigms for chronic pain. They report that patients randomized to the innovative two-step approach spoke of an evolving understanding of their pain experience during the trial, and of how this new understanding helped them manage their pain more effectively.

The ESCAPE study was supported by a grant from VA Rehabilitation Research & Development. The views expressed in the study are those of the authors and do not necessarily represent the views of the Department of Veterans Affairs.