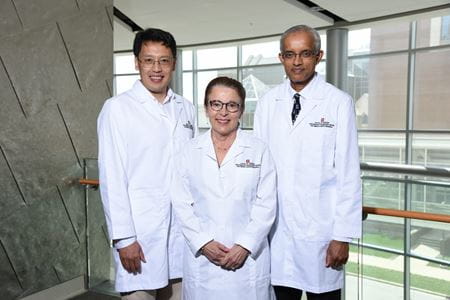 INDIANAPOLIS—The Chan Zuckerberg Initiative announced today that a team of Indiana University School of Medicine researchers is joining a select group of scientists, computational biologists, software engineers and physicians as winners of the CZI Seed Networks for the Human Cell Atlas awards.

The Chan Zuckerberg Initiative is awarding $68 million in funding to support the Human Cell Atlas (HCA) and its selection of 38 collaborative science teams to launch the Seed Networks projects. The HCA is a global effort to create a reference map of all cell types in the human body—with a goal of generating a fundamental reference for biomedical research. Mapping the healthy breast at the single-cell level has been a focus of Nakshatri’s group for years, and the support of $750,000 over the next three years from the Chan Zuckerberg Initiative will help further that effort.

“The goal of this particular project is, through the 75 samples we will be testing from women of different genetic ancestries, to produce a complete map of the normal breast,” said Nakshatri, asserting that this approach of using samples from women of various ethnic backgrounds appealed to the Chan Zuckerberg Initiative’s focus on social equity.

“We want to answer the questions: How many types of cells are present in the breast? How many changes do you see between women of different genetic ancestry? And eventually we want to know how much of it will change based on age.”

According to Nakshatri, more than 99.9 percent of the human genome is similar across every individual. His group is looking at that .1 percent difference—the difference that makes everyone look and behave differently. Those genetic nuances, Nakshatri said, could possibly also have an influence on the normal breast composition itself.

“Obviously, we cannot map everyone’s breast,” Nakshatri said. “But if we can create a human cell atlas based on genetic ancestry, that would help in streamlining disease characterization and addressing health disparities among different ethnic populations.”

This research would not have been possible without philanthropic support. In October 2018, the Catherine Peachey Fund, a member of the Heroes Foundation Family, made a $250,000 gift to initiate the Catherine Peachey Fund Normal Breast Taxonomy Project. The project will analyze healthy breast tissue samples from the Komen Tissue Bank, a unique resource that exists only at IU School of Medicine.

“In reality, no one was using a proper control until we had access to healthy breast tissue samples from the Komen Tissue Bank. It is a richly annotated data set, in terms of women who donated their tissue,” Nakshatri said. “I don’t think I would have embarked on this journey if there was no Komen Tissue Bank at IU. There is no way that would be possible.”

In addition, IU School of Medicine has invested more than $3.5 million in the past three years in the Center for Medical Genomics (CMG) for improving its genomics capacity, including next generation sequencing and single cell analytics. At the same time, the Center for Computational Biology and Bioinformatics (CCBB) has developed and implemented methodology for analyzing single-cell data. These efforts, the researchers said, further strengthen the scope of their work. Both centers are directed by Liu.

The Chan Zuckerberg Initiative will propel this project forward, allowing Nakshatri and his colleagues the opportunity to convert the investments of philanthropy into developing more knowledge of the influence genetic ancestry has on normal breast biology.

“It’s a huge deal to be part of this,” Nakshatri said. “We are joining a major network of big institutions, like Harvard and Stanford, that have received funding from this initiative. It is a tremendous opportunity for IU School of Medicine.”

Founded by Dr. Priscilla Chan and Mark Zuckerberg in 2015, the Chan Zuckerberg Initiative (CZI) is a new kind of philanthropy that’s leveraging technology to help solve some of the world’s toughest challenges—from eradicating disease, to improving education, to reforming the criminal justice system. Across three core Initiative focus areas of Science, Education, and Justice & Opportunity, they’re pairing engineering with grant-making, impact investing, and policy and advocacy work to help build an inclusive, just and healthy future for everyone. For more information, please visit www.chanzuckerberg.com.