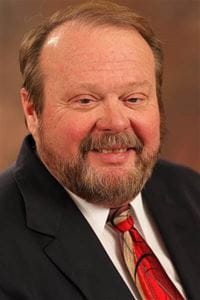 Bankston joined the IU School of Medicine faculty in 1978 and spent the entirety of his career as an educator, researcher and administrator at the Gary campus. He was one of the pioneering designers of IU School of Medicine’s competency-enhanced curriculum. He also helped expand the Northwest campus’ medical education program from a two-year program to a four-year program.

IU School of Medicine Dean Jay L. Hess, MD, PhD, MHSA, said the scholarship is a fitting honor for someone who has given decades of service to medical education in Gary.

“Dr. Bankston has been unwavering in his commitment to students and ensuring they receive a stellar education. His passion for helping them succeed also helps Northwest Indiana, providing the region with superb, compassionate physicians,” Hess said.

Bankston began as a professor of anatomy and cell biology, receiving numerous honors for teaching and research, including the prestigious Trustees Teaching award. He retired in June as director of IU School of Medicine—Northwest-Gary, a position he had held since 2006. After such a legacy, it’s not surprising Bankston is proud of the medical education offered at the campus.

“The educational experience provided at IU School of Medicine—Northwest is second to none,” Bankston said. “The future of patient care in our region is dependent upon our ability to attract and educate tomorrow’s physicians and health care providers today.”

IU School of Medicine—Northwest-Gary has been preparing the region’s physicians for more than 45 years, with more than 800 students receiving some or all their medical education on the campus.

Recently, the campus began a push to enhance its curriculum with special instruction, research opportunities and community engagement in the areas of urban medicine and health care disparities. It is part of IU School of Medicine’s scholarly concentration initiative, which aims to build on strengths of each of the school’s nine regional campuses.

In making their endowment gift, the scholarly concentration was of special interest to the Lake County Medical Society. Nabil Shabeeb, MD, the society’s board chair, said the gift was also part of “giving back to our region and lending a helping hand to those students in their path to completing medical school and fulfilling the commitment to the health and wellbeing of residents in our region.”

Elizabeth Ryan, EdD, who succeeded Bankston as associate dean and director of the School of Medicine’s Northwest campus, said she considers it an honor to follow in Bankston’s footsteps.

“Dr. Bankston has been a champion for medical students in Northwest Indiana and has displayed visionary leadership for our campus,” Ryan said.

Bankston will continue to serve as dean of the College of Health and Human Services at IU—Northwest, a position he assumed in 2008.