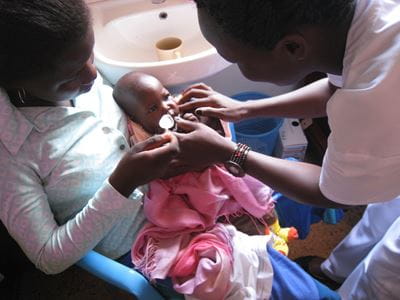 A group of researchers including Chandy John, MD, from Indiana University School of Medicine, published a study in the New England Journal of Medicine showing malaria chemoprevention reduces morbidity and mortality in children with severe anemia.

Malaria is a major cause of anemia, which contributes substantially to child mortality and is a leading cause of hospital admissions in Africa, where malaria is prevalent. Most research on severe anemia in Africa has focused on improving in-hospital care, but in areas with intense malaria transmission, a substantial, potentially preventable component of the burden occurs in the first few months after patients leave the hospital. The patients are more likely to die during the first few months after going home than they were when they were in the hospital.

A multi-center, two-arm, randomized, placebo-controlled clinical trial in nine hospitals across Kenya and Uganda was conducted to determine if three months of malaria chemoprevention taken at home could reduce morbidity and mortality during the post-discharge period in children who had recently been admitted for severe anemia. Malaria chemoprevention is defined as the intermittent administration of full treatment courses of an antimalarial medicine to children in areas of highly seasonal transmission during the malaria season. The results showed that children who were randomized to the chemoprevention arm were 70 percent less likely to die or be re-admitted than children who received the standard of care.

“This simple intervention had an extraordinary effect, and the research group is currently discussing with ministries of health how such an intervention could be implemented in regions with substantial incidence of severe malaria and severe anemia,” said John, who is the Ryan White Professor of Pediatrics at IU School of Medicine.

“This study confirms that young children who survive the initial hospitalization remain at very high risk of dying at home or having to be readmitted within the first three months after discharge,” said Feiko ter Kuile, from the Liverpool School of Tropical Medicine, who led the study. “We suspected that repeated malaria infection played a major role in preventing a full recovery when these children would go back home, but the magnitude of the beneficial effect of these short courses of malaria prophylaxis was beyond our expectations.”

This study, which was published on December 2, 2020, was made possible through collaborations with our partners at the Centre for Global Health Research, Kenya Medical Research Institute (KEMRI), and the Kisumu County Department of Health, Kenya Ministry of Health, Kisumu, Kenya;  Makerere University College of Health Sciences, Kampala, Uganda; the Department of Biostatistics, University of Liverpool, UK;  Division of Parasitic Diseases and Malaria, Center for Global Health, Centers for Disease Control and Prevention, Kisumu, Kenya and Atlanta, GA, USA; Emma Children’s Hospital, Academic Medical Centre, University of Amsterdam, Netherlands; the Ryan White Center for Pediatric Infectious Disease and Global Health, Indiana University School of Medicine, Indianapolis, USA; the Section for Ethics and Health Economics and the Centre for International Health, Department of Global Public Health and Primary Care, University of Bergen, Norway; and the School of Public Health and Family Medicine, College of Medicine, University of Malawi, Malawi.