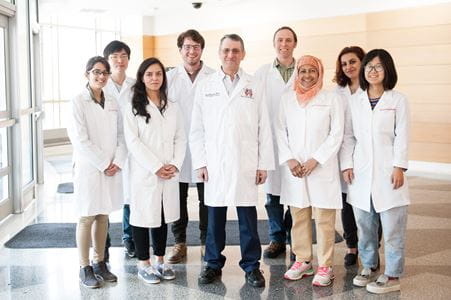 INDIANAPOLIS—Researchers from Indiana University School of Medicine Department of Microbiology and Immunology are studying new ways to treat seasonal or intermittent asthma. Their findings were recently published in Science Immunology.

“Asthma has no cure and current treatments primarily focus on resolving the symptoms,” said Ben Ulrich, PhD, lead author of the study. “While spending time in the high-risk asthma clinic at Riley Hospital for Children, I observed many patients had a more intermittent disease course. We went into the lab and developed models to more accurately define allergic memory and recall response in the lung.”

When someone with seasonal or intermittent asthma breathes in allergens, they can have symptoms such as wheezing, coughing and, in severe cases, asthmatic exacerbation or hospitalization. These symptoms result from inflammation, airway constriction, and mucus production. Once exposed to the seasonal allergens, which include exposure to pollens, fungi or other allergens only prevalent at certain times of the year, antigen-presenting cells activate CD4 positive T-cells to secrete cytokines, starting inflammatory cascades. The team looked at one cytokine, called interleukin 9 (IL-9), to see how it impacts allergic memory responses.

They found a unique population of memory CD4 T-cells that produced IL-9, along with IL-5 and IL-13. These cells secreted IL-9 in an antigen-specific manner. Additionally, these cells express ST2, which is an IL-33 receptor, and demonstrated amplified IL-9 production in the presence of IL-33 in an allergen-specific manner. Blockade of IL-9 led to a decrease in expression of several genes associated with mucus production in the epithelial cells. It also led to a decrease in CD4 T-cells and B-cells and altered expression of activation markers on microphages.

“Asthma exists in multiple forms and seasonal or intermittent asthma can be very different from other forms because of chronic exposure to allergens,” said Mark Kaplan, PhD, chair of the IU School of Medicine Department of Microbiology and Immunology and senior author of the study. “This study demonstrates targeting IL-9 in the lungs during seasonal allergies could help with lung inflammation. By focusing on a population of memory cells that mediate the allergic recall responses of the lungs, we could develop new targets for treatments.”