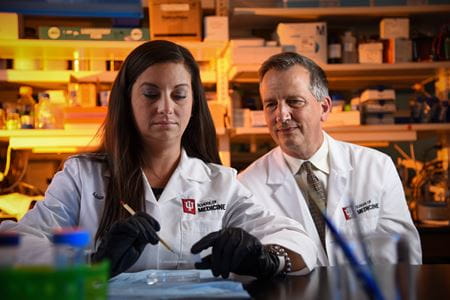 INDIANAPOLIS—The second largest federally funded research program at Indiana University School of Medicine will receive $48.8 million over the next five years, fueling the work of researchers as they seek to discover treatments for Alzheimer’s disease.

In 2016, the NIA established MODEL-AD—a consortium of experts at IU School of Medicine, Jackson Laboratory, the University of Pittsburgh School of Medicine and Sage Bionetworks— to generate and validate new animal models of late-onset Alzheimer’s disease as well as perform rigorous preclinical testing of potential therapeutics. The NIA awarded the program $25 million for its first five years and extended the grant into a sixth year in 2021 for $5 million.

“Over the past several years, the Alzheimer’s disease research portfolio at IU School of Medicine has greatly expanded in scope, from understanding the basic disease mechanisms to moving novel therapeutics into patients and everything in between, said Bruce Lamb, PhD, executive director of Stark Neurosciences Research Institute. “MODEL-AD is a critical piece of that puzzle as we continue to develop the next generation of animal models.”

Close to 55 million people worldwide—including more than 6 million in the United States—are estimated to have Alzheimer’s disease or related dementias, according to the World Health Organization. In the U.S., that’s expected to rise to about 13 million people by 2050.

Since the consortium was first established, researchers have created more than 40 animal models carrying genetic risk variants that closely mimic human Alzheimer’s disease. These models have been characterized using molecular and imaging modalities used in the clinic, revealing Alzheimer’s disease relevant phenotypes not observed in prior mouse models.

“MODEL-AD arose out of the Precision Health Initiative and is an example of what strong leadership and a sustained focus on a prioritized area can achieve,” said Jay L. Hess, MD, PhD, MHSA, executive vice president for university clinical affairs and dean of IU School of Medicine. “We set out to be a national resource in the battle against Alzheimer’s disease and under Dr. Lamb’s leadership we are delivering on that vision.”

All animal models, protocols and validation data studied by MODEL-AD are shared online to the greater research community through the AD Knowledge Portal, run by Sage Bionetworks.

“The renewal of the MODEL-AD grant allows us to continue building robust research infrastructure to advance our understanding of Alzheimer’s disease and evaluate potential novel therapeutics as a resource for the greater research community,” said Rizzo. “The renewal will allow us to build on our progress of generating and characterizing new animal models to study late-onset Alzheimer’s disease and enable the acceleration of clinical trials by improving the translational potential of promising investigational compounds.”

“We are excited to enhance and expand our efforts using the latest molecular discoveries, computational strategies, and emerging technologies to transform preclinical studies of Alzheimer’s disease,” said Carter. “By combining the resources of The Jackson Laboratory with our partner institutions, we are eager to continue making foundational contributions to the NIA’s Translational Initiatives to find treatments for this yet-uncurable disease.”

For the past three years, MODEL-AD has been among the top five NIH-funded research studies at IU School of Medicine; four of those programs were for Alzheimer’s disease research, in alignment with the school’s top priorities. MODEL-AD is now the second largest funded grant at the school.