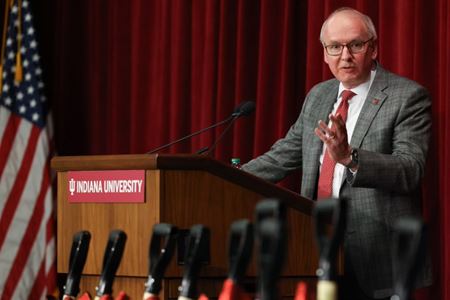 Dean Jay Hess speaks at the groundbreaking ceremony for the new medical education and research building.

INDIANAPOLIS—The future of medicine in central Indiana will soon be on the rise in downtown Indianapolis.

Indiana University School of Medicine broke ground Wednesday on a $230 million medical education and research building. At 11 stories and more than 326,000 gross square feet in size, the facility west of Senate Avenue and south of the IU Neurosciences Research Center on 16th Street will address growing instructional and research needs at the school.

“As we break ground on Indiana University School of Medicine’s new medical education and research building, we celebrate the creation of a space that will accelerate our faculty’s cutting-edge discoveries, advance our students’ preparedness for careers in medicine and enhance and even save lives,” said IU President Pamela Whitten. “IU is committed to addressing the state’s need for highly-trained medical professionals, and this leading-edge health sciences facility is a physical representation of our mission to serve our state and improve Hoosiers’ quality of life and a reminder of our strong partnership with Indiana University Health.”

The construction project is the largest in IU School of Medicine’s 120-year history. As the largest medical school in the country, and a national research powerhouse, the school’s downtown campus will soon be transformed into a leading-edge facility.

“While we’ve added new facilities at our regional campuses in recent years, we have not built new classroom space in Indianapolis since 1959,” said Jay L. Hess, MD, PhD, MHSA, dean of IU School of Medicine and executive vice president for university clinical affairs at IU. “This state-of-the-art facility will transform how we train generations of future physicians, while also providing our scientists with much-needed lab space to continue and expand their research focused on improving health.”

The first three floors of the new building—the broad base of the structure—will focus primarily on medical education. In an homage to IU’s architectural heritage, the base will feature elements of the limestone buildings in Bloomington, along with the brick accents of the medical school buildings at IUPUI. The ground floor will feature a large atrium and spaces for small learning communities, classrooms, lecture halls and a café. The next two levels will feature additional classrooms, a surgical skills center, simulation spaces, a library, practice exam rooms and an anatomy lab.

From there, an eight-story tower will rise from the academic base and will include research and office spaces for the school. The tower will be sheathed in glass and designed with energy efficiency in mind. An underground tunnel will connect the building to Goodman Hall and the Neuroscience Research Building to the north.

The facility will be co-located with the new downtown Indianapolis hospital and expanded medical campus of Indiana University Health, where the health system is consolidating operations of its two downtown adult acute care hospitals south of 16th Street. The health system contributed $145 million to the IU School of Medicine building project—an investment IU Health President and CEO Dennis Murphy said speaks to the organization’s unwavering commitment to supporting medical education and research.

“IU Health is proud to have helped fund IU School of Medicine’s new medical education building,” Murphy said. “It will be an integral part of our new academic health center campus, strengthening the unique bond between the School of Medicine and IU Health and allowing future generations of medical students and faculty to teach, train and work in a world-class academic medical setting.”

The architectural design, developed by Browning Day of Indianapolis and Perkins & Will of Chicago, was approved by the IU Board of Trustees in February 2022. The building is expected to be completed in November 2024.

MEDIA KIT: Access high-quality photos and videos from the event