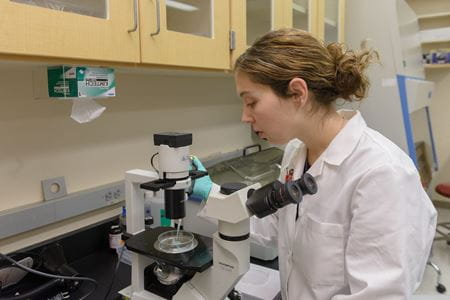 Emily Sims, MD, sits at a microscope in her laboratory.

INDIANAPOLIS–Researchers at Indiana University School of Medicine are celebrating Federal Drug Administration approval of teplizumab, a new immunotherapy drug that delays the onset of type 1 diabetes in at-risk individuals by an average of almost three years. IU School of Medicine helped conduct clinical trials and led data collection and analysis of the drug, which was approved November 17.

“Since the early ’90s, people have been trying to delay onset of type 1 diabetes. This is the first successful drug to do that,” said Emily K. Sims, MD, associate professor of pediatrics and a physician scientist with the Center for Diabetes and Metabolic Diseases (CDMD) and the Herman B Wells Center for Pediatric Research at IU School of Medicine. “People in the field are super excited.”

IU School of Medicine was one of 28 sites that participated in the original teplizumab study conducted by TrialNet, the largest clinical trial network ever assembled to discover ways to delay and prevent type 1 diabetes. Type 1 diabetes is an autoimmune disease which occurs when the body’s immune system attacks and destroys insulin-producing beta cells in the pancreas, causing abnormal blood glucose levels. Teplizumab is an immunotherapy drug designed to interfere with the body’s immune destruction of its own beta cells.

Sims was a key investigator on a TrialNet analysis providing extended follow up with participants from the original Teplizumab Prevention Study concluded in 2019. The newest findings show high-risk individuals treated with Teplizumab experienced a median delay of diagnosis by 2.7 years versus the placebo group.

“Nearly three years delay in the onset of disease is a big deal,” said Sims. “Even if someone has the newest technology to deliver insulin, there’s still a huge financial and psychological burden that goes along with diagnosis.”

In addition to the pronounced delay of disease, those treated with teplizumab showed improved rates of insulin production, despite exhibiting insulin loss over time prior to treatment. Participants receiving a placebo continued to show a decline in insulin production consistent with disease advancement.

“The idea of disease prevention and disease modifying therapy is really exciting,” Sims said. “You can imagine it might really change the way we treat people with type 1 diabetes and those at high risk for developing the disease. This is just the beginning.”

Study participants were relatives of people with type 1 diabetes who have two or more autoantibodies and abnormal blood sugar levels, identified by TrialNet’s Pathway to Prevention screening as having a nearly 100-percent lifetime risk of clinical diagnosis. Of the original 76 participants, 72 percent were children under age 18.

“These study results are of great worldwide importance, especially for the relatives of people with type 1 diabetes who are themselves at 15 times greater risk of developing the disease than the general U.S. population,” said Linda DiMeglio, MD, MPH, TrialNet vice chair and professor of pediatrics at IU School of Medicine. “We are excited that Indiana University was able to contribute to this groundbreaking research with its potential to impact people at risk for type 1 diabetes. These findings highlight that type 1 diabetes can be delayed with therapies that influence the immune system.”

“I’m incredibly proud of the role that our faculty played in this trial and the contributions they make every day in order to improve our understanding of type 1 diabetes,” said Carmella Evans-Molina, MD, PhD, MS, director of the Center for Diabetes and Metabolic Diseases at IU School of Medicine. “Our center is unique because we have world-class investigators who are focused on studying very basic mechanisms of diabetes pathogenesis as well as translational questions like the development of biomarkers of type 1 diabetes, which we hope can be used to identify people who are at increased risk of developing the disease.”

In response to teplizumab’s approval, Riley Hospital for Children at Indiana University Health has opened a new clinic for individuals identified as high risk for developing type 1 diabetes, funded through donations from the George and Frances Ball Foundation of the Luke Bracken Wiese Fund for Juvenile Diabetes Research and the William and Helen Thomas Trust.

“We’ve been able to identify people who are at risk for type 1 diabetes for decades, but until now, we haven’t had anything to mitigate that risk, which leaves families just waiting for disease to develop. To be able to discuss this as an option for delay in diagnosis is incredible,” said clinic director Jamie Felton, MD.

TrialNet offers free risk screening for relatives of people with type 1 diabetes. Options include ordering an in-home test, ordering a test kit to take to a local lab, or making an appointment at a TrialNet location, which includes Riley Hospital for Children in Indianapolis.