Study: Minimally-invasive surgery for hip gunshot wounds can be risky 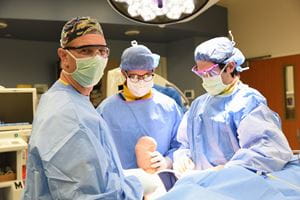 Orthopaedic surgeons hoping to use a common, minimally-invasive procedure to treat gunshot wounds to the hip must be aware that such surgeries come with a very high risk of complications, according to clinical research conducted by Indiana University School of Medicine faculty. 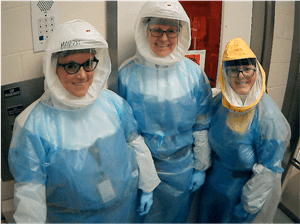 One Indiana University School of Medicine researcher is using her study of bone and fracture healing to better understand the effects of COVID-19 on the body. The Kacena Lab in Indianapolis—led by Melissa Kacena, PhD, the Vice Chair of Research for the Department of Orthopaedic Surgery—is the first lab in the state to begin using mouse models to study the novel coronavirus, in hopes of discovering a treatment for the disease.

The Department of Orthopaedic Surgery at Indiana University School of Medicine is mourning the loss of a longtime mentor and former chair. Richard Lindseth, MD, the George J. Garceau Professor Emeritus of Pediatric Orthopaedic Surgery, died this month. He served on the faculty for more than 30 years. He was appointed department chair in 1995.

Jason Watters, MD, a professor in the IU School of Medicine Department of Orthopaedic Surgery, is partnering with an Indiana medical technology company to test the effectiveness of a mobile compression device in preventing deep vein thrombosis—a risky post-surgery side effect of a knee replacement. A $1.8 million grant from the National Institutes of Health will cover the cost of testing the device on some 300 patients in Indianapolis and Boston.

One small change during an essential part of a common surgical procedure could decrease the number of narcotic painkillers female patients usefollowing an operation, a study conducted by IU School of Medicineresearchers revealed.

By going without a tourniquet during a total knee replacement surgery, doctors can minimize patient pain and cut down on the use of opioids during recovery.

After Rob Wessel, MD, completed his fifth and final year as an orthopaedic surgery resident, he chose to continue studying in Indianapolis for a few extra months, honing the skills he’ll need to be an excellent surgeon. Wessel accepted a spot in the one-year orthopaedic trauma fellowship with the Department of Orthopaedic Surgery, working under the guidance of the celebrated traumatologists who serve as department faculty.

For the second time in as many years, an IU School of Medicine professor and her team of researchers took their experiment into outer space.

Melissa Kacena, PhD, director of basic and translational research and professor in the Department of Orthopaedic Surgery, and eight IU School of Medicine learners traveled to Cape Canaveral, Florida in July 2019 to complete the second phase of their bone-healing research project, a collaboration with NASA and the U.S. Army.