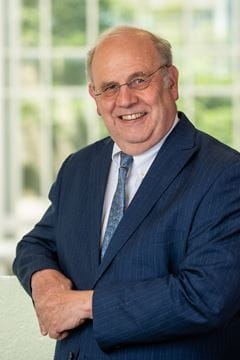 In 2009 Dr. D. Wade Clapp was appointed Chair of the Department of Pediatrics and Physician-in-Chief. Dr. Clapp is a Distinguished Professor, the Richard L. Schreiner Professor of Pediatrics, Professor of Microbiology & Immunology and Professor of Biochemistry & Molecular Biology at Indiana University School of Medicine.

Dr. Clapp, a neonatologist and physician/scientist, continues his research which includes NIH grant support focusing on translational research in childhood cancer. He is past director of the MD/PhD program at IU which is now an NIH designated Medical Scientist Training Program. Dr. Clapp's research focuses on genetic diseases with a predisposition to cancer in babies and young children, specifically neurofibromatosis type 1 (NF1). In 2008, Dr. Clapp and colleagues discovered the first effective therapy for a class of tumors often found in children that previously were untreatable and potentially life threatening. Dr. Clapp and fellow researchers reported treatment for the nerve tumors affecting patients with neurofibromatosis type 1, the most common neurological disorder caused by a single gene mutation.

The department has grown to almost 400 faculty and more than 150 pediatric residents and fellows. The first phase of the $450 million 650,000 square foot Simon Family Tower inpatient building was completed in January 2011 providing for 309 in-patient beds. A new, NIH funded Clinical and Translational Research Facility (20,000 square feet) opened in 2013. The department ranks #6 in NIH funding to pediatric departments in the United States. Riley Hospital for Children at Indiana University Health is ranked as one of the nation’s best and is one of only ten children’s hospitals ranked in all areas of medical care by U.S. News and World Report. Through the years, the department has dramatically expanded clinical services to outlying IU Health hospitals and communities across the state.

Dr. Clapp grew up on a farm a mile outside of Marysville, Indiana, where he was one of 46 graduates in his rural consolidated high school class. He graduated from Hanover College and the IU School of Medicine, and completed a neonatology fellowship at Case Western Reserve University before joining their faculty. He became one of the Wells Center’s earliest recruits in 1991. He joined the faculty of Indiana University School of Medicine in 1991 as a physician and researcher at the Herman B Wells Center for Pediatric Research.