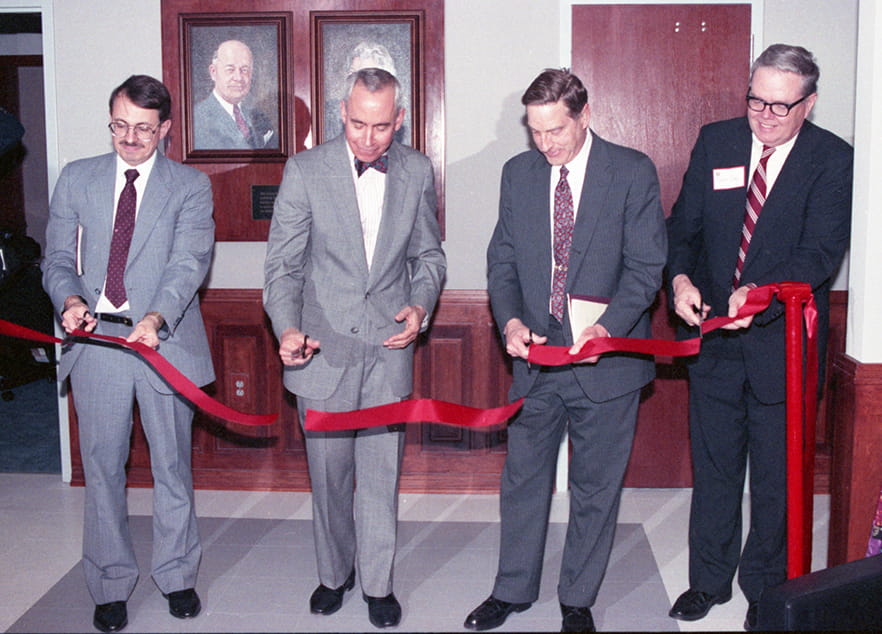 Pictured above: Photo of ribbon cutting at the Herman B Wells Center for Pediatric Research dedication ceremony, May 1990. Photo courtesy of IUPUI Special Collections and Archives.

Named after Herman B Wells, former president and chancellor of Indiana University and a member of the Riley Memorial Association for more than 50 years, the Herman B Wells Center for Pediatric Research was established to accelerate improved health outcomes for children facing pediatric disease. A generous $4.5 million gift from the Riley Memorial Association helped fund the development of the center, which was approved by the Indiana University Board of Trustees in June 1988. The center was formally dedicated in May 1990, and in August 1991, its inaugural director David A. Williams, MD, and other investigative teams initiated research at the Wells Center.

Since its inception, the Wells Center has grown from its four original lead investigators to 40 principal investigators and nearly 200 faculty, trainees and support staff today. Though the center was originally housed in Riley Hospital for Children at IU Health, its growth in personnel and funding for new projects quickly demanded larger workspaces. In 1997, the center doubled its size to over 27,000 square feet. Additional space expansions occurred in 2003 and 2009, and today its investigators conduct their research in nearly 75,000 square feet of workspace at 1044 West Walnut Street, Indianapolis, and the Van Nuys Medical Sciences building across the street.

The rapid growth of the center continues as its investigators gain national recognition for their work, and the number of programs has nearly doubled in the last decade. In 2008, the center added the Pediatric Diabetes program; in 2014, the Cardiovascular Genetics program was established; and 2018, the Gene and Cell Therapy program was launched. In 2020, the center added two new research programs: the Kidney and Urology program and the Pediatric Translational Research program, which focuses on connecting investigators with key resources for rapid translation of their work.

Williams held the role of center director for nine years. In 2000, Mary Dinauer, MD, PhD, was named director. Dinauer served until 2008, when Mervin C. Yoder, MA, MD  assumed leadership of the center. In August 2017, Raghu Mirmira, MD, PhD, became director of the Wells Center and served through October 2019. In November 2019, Reuben Kapur, PhD, was named the interim director of the Wells Center, and in May 2021, Kapur was appointed center director.